During 1946 No.35 Squadron participated in a ‘Goodwill Tour‘ of the United States, later returning in September to RAF Stradishall, due to RAF Graveley’s closure. 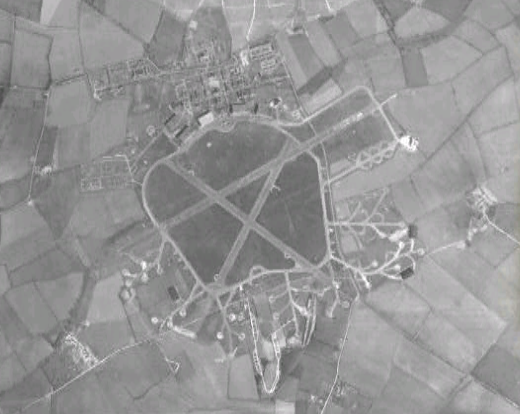 WAAF’s Story
I was asked to bring back to Stradishall 10 young Girls, Conscripts who had never left home before. I had their Travel Warrants & Particulars so imagine my horror when at Liverpool Street Station we had to run over the Bridge to catch our Train that was about to leave and half the Girls got on and the other half got left behind.  I think it was Marks Tey where we had to change Trains so I went with my tale to the Station Master and he said no more Trains from London that Night. When I got to Haverhill (the nearest large Rail Station to RAF Stradishall) my name was called and I was told my charges had been put on a Train coming Cambridge way. It was very late when it finally arrived and it came in on the Platform over the Bridge, I could see the Girls in there but they didn’t attempt to alight and as the Guard blew his whistle I flew across the Bridge shouting at him.  He blew his whistle again and to my relief, the Train stopped and he was very cross as the Girls tumbled out and he threw their Kit Bags out after them. It was midnight when we got back to Camp and I had to traipse around to find empty Beds for them, what a day, it’s imprinted in my memory.

Raf Stradishall c.1943
Stradishall was an active RAF Station for over 30 years, opening in February 1938 as part of 3 Group.  It was 1st occupied by No.9 Squadron with Heyford’s & 148 Squadron with Wellesley’s, although the latter was soon replaced by Heyford’s & Anson’s.  In September 1938 the Munich Crisis had Stradishall on full alert and its tentative Target, in Case of War, was Berlin.  In early 1939 No.9 Squadron left to be replaced by the Wellington’s & Anson’s of 75 Squadron, but Stradishall was Vacant, when these moved on, from September to October 1939.

75 (NZ) Squadron Wellington bombers at RAF Stradishall in 1939, ready to fly to Brussels & Paris as a show of strength from the RAF.  The 1st Commonwealth Squadron to be formed in Bomber Command – took part in the early Bombing Offensive against Enemy-occupied Territories.  After a brief period of Blenheim 1F Fighters, Wellington Bombers returned in February 1940 with 214 Squadron, the Federated Malay States Squadron, who stayed until October 1942. One of the Hangers suffered Enemy Bomb Damage in early 1941.

138 Squadron flew many Sorties from November 1941 to March 1942 with Whitley Bombers.  In April 1942 No.214 Squadron converted to Stirlings & 109 Squadron arrived in Wellingtons, then Oxfords of 1521 BAT Flight (Beam Approach Training).  In May 1943 Stradishall controlled Ridgewell & Chedburgh but in December 1944 No.186 Squadron arrived from Tuddenham with Lancasters and Operated until they disbanded in July 1945. After the War Stradishall left 3 Group and passed to 48 Group Transport Command and in August 1945 No.s 51 & 158 Squadrons arrived in Stirling CV’s and these flew until March 1946 when 51 Squadron received Yorks.

Both Public & Private money was utilised to Fund the War Effort and appeals for Private Funding were made in the UK and in the British Commonwealth.  A “Price List” for the various Aircraft Types was drawn up which showed that Donations of a particular sum would entitle the Donor to have their name inscribed on a randomly selected production Aircraft of that Type.  During WW2, this concept was taken one step further, with larger gifts resulting in an entire Squadron being linked to the relevant Donor.

The term “Madras Presidency” was formally dropped from the Squadron’s title in June 1952.  Madras Presidency included the districts of Coimbatore, West Godavari & Kistna (now Krishna) in the present-day states of Tamil Nadu & Andhra Pradesh. The latter 2 Districts were named after the Rivers that flow through them.
Writing Table Set – that had been gifted by the Madras Presidency War Committee was presented to the Squadron at a Ceremony at RAF Stradishall in March 1948

In September 1946 Stradishall reverted to 3 Group and 5 Squadrons of Lancasters including No.35 Squadron and were based here until February 1949.  In July 1949 Stradishall became No.203 Advanced Flying School for Meteors, a few Spitfires, Vampires & Harvard’s into the 1950‘s.  Stradishall then attained some fame as a Transit Camp for Ugandan Asians expelled by Idi Amin.  In July 1977 Stradishall became Highpoint Prison and it has been extended & improved as a Prison ever since.  The “Hard Times” Cafe stands outside the Prison Gates today, on the Road from Bury St Edmunds to Haverhill.