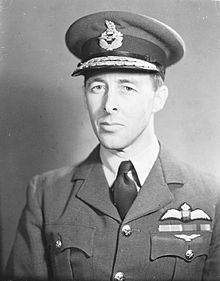 No 8 Group Pathfinder Force
The Pathfinder Force (PFF) was upgraded to Group status on 8th January 1943 and became No 8 Group Bomber Command.
Air Vice Marshal D C T Bennett-AOC 8 (PFF) Group, 1943-5
‘His Technical knowledge and his personal Operational ability were altogether exceptional. His courage, both Moral & Physical was outstanding and as a Technician he was unrivalled. He could not suffer fools gladly, and by his own high standards there were many Fools’.  Renowned for his bluntness and not disposed towards unnecessary flattery, this was praise indeed for Bennett from his commander Bomber Harris. In 1944, at the age of 33, Don Bennett became the youngest Air Vice-Marshal in the History of the RAF.

Bennett was promoted to Wing Commander in December and appointed to Command No.77 Squadron at Leeming.  He later moved on to Command 10 Squadron in April 1942 and was shot down on a Raid to Sink the Tirpitz.  He evaded Capture and made his way home to England via Sweden.  The High Ppoint of Bennett’s RAF Career came in July 1942 when Harris asked him to form the Pathfinder Force, and which Officially came into being the following month.  Bennett was promoted Air Commodore in January 1943 and later Air Vice-Marshal.  That same year he was awarded the DSO.  The success of the Pathfinder Force was due in large measure to Bennett’s relentless Drive & Vvision: night after night for the remaining 3-yrs of the War, almost every Main Force Raid was spearheaded by the Pathfinders who contributed in a major way to the successful prosecution of the RAF’s Strategic Air Offensive.

The PFF was initially composed of 4 Units Stationed at Oakington, Graveley, Wyton & Warboys.  Wyton was situated in the Middle of the Stations and was chosen to be the Headquarters.

Castle Hill House
Bennett’s HQ was originally at RAF Wyton. When the PFF expanded dramatically, it moved to Castle Hill House, Huntingdon, in June 1943, and remained there for the rest of the War.
Harris advised him that he had been Instructed to form a Special Marking Force in an attempt to improve the Accuracy of his Heavy Bombs, something Bennett himself had suggested to the Director of Bomber Operations about a year before.  Harris also informed Bennett that he was to be promoted to Group Captain to Command this Unit, which would be known as The Pathfinder Force.  Setting up his HQ at RAF Wyton,  Bennett was allocated 1 Squadron from each Group as his initial Establishment, resulting in his Unit being equipped with 4 different Types – Wellington’s, Stirlings, Halifax’s & Lancaster’s.  With the success of the new Unit, following some early teething problems, Bennett’s command was upgraded to Group Status on 8th January 1943 and given the Title – No 8 (PFF) Group with Bennett promoted to Air Commodore as it’s AOC.  During the remainder of the War No.8 Group continued to Lead & Mark Targets for the Main Force, although he often found himself at odds with his fellow Group Commander at No.5 Group, AVM – Ralph A Cochrane, over Marking Techniques and the need to concentrate Marking Squadrons in a single Specialist Group.  At the time of his appointment, he was the youngest Air Vice Marshal in the RAF but on leaving the RAF at the end of WW2, he was the only Group Commander, who was not Knighted having served a Full Term in this Post.

The idea of using an Elite Corp of Crews with High Navigational Ability evolved from the somewhat limited Accuracy of Bomber Crews during the early years of the War together with the Development of more sophisticated and difficult to use Electronic Navigational Aids.  Although originally opposed by Marshall of the RAF Arthur Harris, the Officer in Charge of Bomber Command, Hand-picked Crews from Operational Bomber Squadrons began to be transferred to Form the Pathfinder Force (PFF) in August of 1942.

The PFF was Commanded by Veteran Australian Bomber Pilot, D C T Bennett, who retained Command throughout the War.  It began Operations within a few hours of its Formation and continued its work of leading the Main Force against the Enemy until the Bomber Offensive ceased shortly before V-E Day.  A variety of Techniques for Marking Targets with Green, Red, & Yellow Flares were utilised depending on Cloud conditions.  Generally, an initial Marking of the Target was improved upon or altered as the Raid progressed.  Circling over the Target, a Master Bomber would Radio Instructions to other Pathfinders as well as to the Main Force Aircraft.  The Gallantry of the Pathfinder Force is Legendary and its contribution to the War Effort immense as it significantly improved the accuracy of the Main Force’s Bombing.  Probably the greatest of its many successes was its part in the sustained Battle of the Ruhr, the Industrial Heartland of Nazi Germany. The PFF flew a total of 50,490 Individual Sorties against some 3440 Targets.  The cost in human lives was grievous as 3727 Members were killed on Operations.  No. 405 (City of Vancouver) Squadron was the only Royal Canadian Air Force Squadron to serve with No.8 Group.  It began Operations with the PFF in April 1943 and served until the end of the War. As its last Operation before VE Day, the Squadron marked the Aiming Point for other Bomber Command Aircraft detailed to drop food supplies to the starving Dutch Civilians at Rotterdam.  Operation Manna

Pathfinder Badges
Despite careful Issue, there is no doubt that many were so used casually by Pathfinder Crews (except the glossy Staybright ones).
Official Badge.  That Badge was exclusively a Pin-backed Badge, the reason being that Aircrews were obliged to remove Pathfinder Badges before Operational Flights, as they were very poorly treated by the Nazis if they were shot down wearing this Badge.  The constant placing & removing of the Badge naturally caused weakness & damage to the attachment and likely loss, so any Eagle available would commonly be used, so long as it was quick to remove.  Not every ‘Eagle’ Badge on Sale as a Pathfinder Badge was a Pathfinder-used Badge, no matter what the claims.  The only ones that were – are the pin-backed gilded brassy Eagles.

On the 4th December 1944, along with 29 other Lancaster Crews we became ‘Dambusters‘ when we carried out a Special Bombing Raid on the Urft Dam.  Although we hit the Dam and knocked 13ft off the Top we didn’t succeed in breaching it.  Unbeknown to us, Air Vice Marshal Don Bennett had also been up with us on this Trip in a Mosquito, to observe the Raid for himself.  I remember him coming into the Debriefing still in his Flying Suit.  He was a truly exceptional man and frequently accompanied his men to see at 1st Hand the job being done. No other Group Commander ever Flew on Operations but this was typical of Bennett and although he Demanded & Accepted only Excellence from his men he was Respected & Admired by everyone – except of course his so called ‘Superiors‘ who saw fit to dishonour him after the War by not bestowing on him the Knighthood he so richly earned and undoubtedly deserved, more so than any other RAF Group Commander, all of whom were Knighted.

During WW2, RAF Station Wyton was the main Pathfinder Airfield. It was very close to Huntingdon where Pathfinder Headquarters was situated, and Air Commodore Donald Bennett, the Commander of the Pathfinders, had his Marital Home on the Station.  The idea for a Pathfinder Museum at RAF Wyton took root in the summer of 1995.  A temporary Display for Pathfinder Sunday (an Annual event each August for the benefit of the Pathfinders and their Families) generated overwhelming Interest, which led to the creation of the Museum.  Subsequently named The Pathfinder Collection, the Museum has evolved & grown considerably since those early days when it was set up by Chief Technician Pete Stanley.  It has also changed premises several times, perhaps its most memorable early Site being the former Roman Catholic Church (later sadly demolished due to structural failure).  The Collection is now housed in the RAF Wyton Heritage & Conference Centre, which contains all the various heritage collections as well as a station history timeline.  The Pathfinder Collection has always been staffed by highly dedicated volunteers, who have a real passion for the heritage which they are preserving.  RAF Wyton in Huntingdonshire is still very much a working Station, and the Pathfinder Collection has grown with the support of successive Station Commanders. The Collection is on a Military Base, Admission to visit it is by Appointment only.  Whilst this process may seem somewhat daunting to the uninitiated, all Visitors are assured of the friendliest of Welcomes by Curators who know their subject inside out.