No.1 EFTS Hatfield (RAF Panshanger 6 Miles North) 09/03 to 04/05/1941
First established at Hatfield were the De Havilland School of Flying and the ‘London Aeroplane Club’ were instigated.  The land currently occupied by the aerodrome is a much-reduced portion of the original 248 acres of agricultural land farmed as part of the Panshanger Estate (Baron Grenfell and Lady Desborough). In June 1940 the Air Ministry, under the terms of the Emergency Powers Act (1939), acquired some 248 acres of agricultural land at Holwell Hyde from the Panshanger Estate. The site was then leased to de Havilland, who was given the responsibility of constructing a Decoy Aircraft Factory to divert enemy bombers from their facility in Hatfield. By the late summer of 1940, it is likely that de Havilland was using the fields around the Decoy Factory as an all grass reserve landing ground for Flying Training. This use is confirmed in an entry in the Operational Record Book (ORB) for the 4th January 1941 in which it states that a snow-clearing plan for the reserve landing ground at Holwell Hyde had been issued. The School changed its name to No.1 Elementary & Reserve Flying Training School (E&RFTS) to reflect this.

Link Trainer Instructor – W R Wheatley
Craig – Proficiency – Above Average
The Link Trainer (below) was a synthetic training device (nowadays known as a flight simulator) which enabled trainee pilots to learn and practice flying.  It consisted of a fuselage, containing a single-seater cockpit with instrument panel, stick and foot pedals; it enabled a trainee to learn the basics and experience the sensation of flying, including banking, pitching and turning.  The trainers were housed in a purpose-built “Link Trainer” building at each RAF station.
One of the most important lessons which a new Pilot entering the RAF has to undergo is taken in the new form of the ingenious “Link” Trainer. The trainer is a dummy cockpit with all the usual instruments. It is free to pivot around its axis and can be tilted fore and aft. An innovation is that it is placed in a circular room with the walls painted to give the impression of sky and land, thus the pupil can go through all the movements of climbing, diving, banking, etc.   For “blind” flying a hood is used to cover the pilot.

Link Aviation Devices, Inc,  Edwin Link, a pilot himself, thought he had the answer. In 1928, Link left his father’s organ building business to begin work on a “pilot trainer.” Link envisioned a device that would allow pilots to take their early flight training while safely on the ground. With his organ building experience, he used air pump valves and bellows to make his trainer move in response to its controls.
Edwin Link had developed a passion for flying in his boyhood years but was not able to afford the high cost of flying.  So, upon leaving school in 1927, he started developing a simulator, an exercise which took him 18 months.  His first pilot trainer, which debuted in 1929, resembled a toy aeroplane from the outside, with short wooden wings and fuselage mounted on a universal joint.  Organ bellows from the Link Organ Factory, the business his family owned and operated in Binghamton, New York, driven by an electric pump, made the Trainer pitch and roll as the Pilot worked the Controls.
The Fuselage was connected to an Instructor’s desk, which contained a synchronised Instrument Panel and a 3-wheeled course plotter (“crab”) which could plot the Course being flown onto a map or sheet of paper.  The Instructor was able to provide Instructions to the Trainee and then record his progress, which could be reviewed at the end of each exercise. 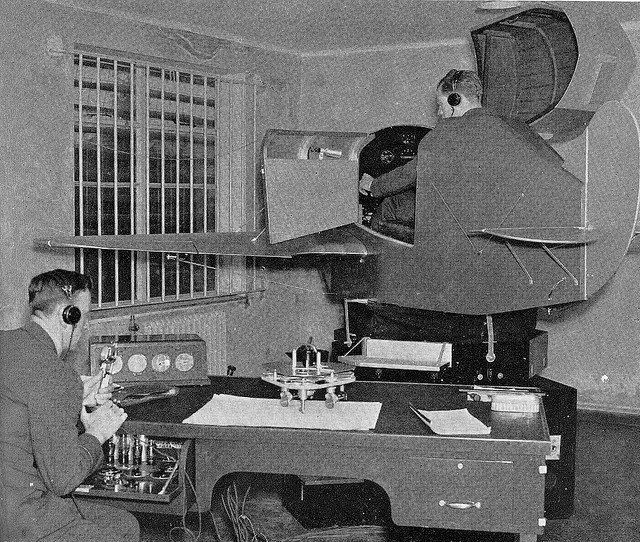 Air Publication AP1920 “The Link Trainer Instructors Handbook” contained a series of standard exercises which could be utilised across the various RAF Training facilities.  The Trainee Pilot would sit in the plane and with the hood closed would be totally dependent on his Instruments and Radio, all simulated by a Technician at a Control desk. Radio messages and Morse would be relayed to the Pilot via a multi-core control cable. The Link could also replicate various weather conditions as well as instrument failures, etc. A motor underneath the base pumped air and created vacuums, in various bellows, to give the feeling of rough weather and dive and climb. The Link was also connected to a moving ‘crab’ on the Operator’s desk which traced his course over a map to show the course he would have taken if he was aloft in an aeroplane.

The Crab
The 2nd major component is an external instructor’s station, which consists of a large map table, a repeated display of the main flight instruments, and a moving marker known as a “crab.”  The crab moves across the glass surface of the map table, plotting the pilot’s track. The pilot and instructor can communicate with each other via headphones and microphones.

Oxford Mkl & ll Cheetah X Engine 21st May to 15th October 1941
The Airspeed Oxford, affectionately known as the OxBox, was the RAF’s 1st twin-engine cantilever low-wing monoplane trainer. A total of 8,586 Oxfords were manufactured and served in training, communications, ambulance and other roles.
The Oxfords’ engines had one very great point in their favour. They were radial or air-cooled engines called Cheetah of various different mark numbers. Unlike any other air-cooled engine you never had to pay any attention to their temperature and they hardly ever burst into flames even under the most tremendous provocation.  Flying in the Airspeed Oxford, or “Ox-box” as it was fondly known, with it’s distinctive yellow-belly Trainer Markings, was eloquently recounted in his autobiography by F/Lt. Chance, or John Newton Chance as was his full name. He was a novelist who became a flying instructor during the War.

Oxfords were of wooden construction and powered by 2 Armstrong Siddeley Cheetah X Radial Engines with fixed pitch, 2-blade propellers.  The Oxford I was equipped for Navigation, Wireless or Bombing Training, but the majority also had a dorsal Turret for Gunnery Training. The Mk II was equipped for Navigation, Radio Operator and Pilot Training only, having no gun turret.
‘After Tiger Moths, the Oxford seemed a very powerful machine. You had to learn to control the swing on take-off by opening one engine or the other a little more.  They went much faster than Tiger Moths and had all sorts of new gadgets, like retractable wheels which usually went up and down when you pressed a lever and flaps which did likewise.’
‘There was no electrical intercommunication in Oxfords or Tiger Moths in those days. They used a system akin to those tubes you find in the walls of very old houses or Ships.  Down these – you had to blow at first and this blew a whistle incorporated in a plug at the far end; this, in turn, summoned a minion from some distant basement.  In an Oxford you had a flexible mouthpiece which you tucked into the front of your parachute harness; the other end was plugged into the Pupil’s helmet.  If you blew into it, it made his eardrums pop. This was seldom necessary however as Pupils were unlikely to go to sleep while flying.’
‘The Oxford was a good deal more exciting to fly having one or two vices, such as dropping a wing when you stalled it.  A week or so after going solo we did our 1st Night-flying.’
‘When flying around, it was always an exciting moment when you pressed the lever which activated the mechanism which caused the wheels to come down and lock in position. The previous Pilot might so easily have given them a sufficient bump to bend them or there might be mud or birds’ nests in the works.  First, one green light would come on and then after an anxious pause, the other.  If you throttled down without the wheels down and locked, red lights flashed and a Klaxon horn blared in your ear. This was because landing with the wheels still retracted did the aircraft no good at all.
Pilot’s Notes Airspeed Oxfords l & ll

WW1 Upavon was the biggest Airfield in the UK with an area of 3324 acres, comprising the North and South Aerodromes, and not that much smaller than Heathrow today! Generally considered to be the birthplace of the Royal Flying Corps along with Farnborough (Hampshire) it appears that Upavon opened in, 1912. It seems that in April 1912 Lord Haldane, the War Minister, and Winston Churchill, First Lord of the Admiralty, announced the formation of the Royal Flying Corps with separate Military and Naval Wings confirming that Upavon would be the location for the Central Flying School.
Runways: WW2: Sommerfeld Track 06/24 – 1143, Remainder grass: E/W  1033, N/S 571,      NE/SW 1189.