On 9th November 1940 the 1st Formation of Bombers for Britain, made in the United States, set out from Gander and reached England the following morning.  This demonstrated the feasibility of Delivery by Air and shortly afterwards Gander became the scene of regular Flights of these Aircraft – manned by men of all Nationalities.  These Flight Deliveries were organised by ATFERO – Atlantic Ferry Organisation (later RAF Transport Command) which the RAF set up at Gander as a Unit to handle the increasing flow of Bombers in 1941.  Up to this date, control & signals were handled by the Newfoundland Staff & Weather Forecasting by Canadian staff.  Not until 1941 did the RCAF take over the functions of the Newfoundland Staff.  It is not generally known that the Newfoundland Staff played such an important part in the early days of Bomber deliveries.  In 1942 the Newfoundland Government handed over control of the Newfoundland Airport (Gander) to the Canadian Government and it became a mighty Military airfield.  The RAF continued as a separate Unit and, when the United States entered the War, their Planes and Soldiers came in to use the Field, the Base being an RCAF Station.  There was a continuous delivery of Planes and many 1,000s dropped down at Gander on their way to the War Zone. 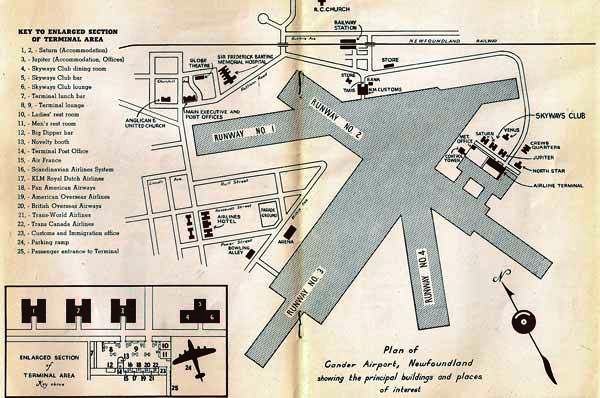 Problems with Weather over Gander delayed W/C Craig’s  ‘A’ Flight’s who were recalled after Departure from Lagens on an ‘Astro’ Flight on the night of the 10th July.  Gander and the alternate Aerodrome had suddenly been blanked out by Fog.  So in spite of trying to avoid such a situation, all 16 Aircraft were being Based at Lagens.  The following night they tried to get away again but the Newfoundland conditions delayed their take-off until about 4.00am   The full Squadron took off at 4 min intervals.  They found that the  H2S proved a very valuable Navigation Aid and they were able to get back bearings on the Azores when as distant from them as 75-miles.  This also proved very useful when they were approaching the Newfoundland Coast at the other end.  The Flame Floats which they were going to use with the drift sight at night worked just as well by day; in fact, under some conditions such as Haze, they functioned better than a Smoke Float under similar conditions.  The independent Navigation of the 16 Lancs across the last stretch of the Atlantic was of such a uniformly high standard that all 16 Aircraft landed at Gander within 18-Mins on Fraday 12th July 1946.

Gander’s Airport Runways originally consisting of 3-Strips, 4,800ft. long by 600ft. wide, had been extended during the last year of the War to take care of heavier wear Transport Airships then being brought into Service.  This expansion had proved invaluable to the transatlantic Airlines of that day.  The Main Runway, known as the No.3 Strip, was now 1200ft wide & 6,000ft long.  Light Sport Planes could land very comfortably across its Width.

The general operation of Gander and the Maintenance of Radio Control Facilities entailed the employment of approximately 500 Civil Personnel.  Some 100 were engaged in Radio and other Technical activities and the balance are absorbed in general Staff activities & catering.  Large Huts which formerly housed USAAF Personnel were used to accommodate Air Travellers who are forced to Stopover due to weather conditions or Aircraft trouble.  These Accommodations, were reconverted by the Newfoundland Government into pleasant private Quarters, they proved a boon to Commercial Airlines in July 1946, when over 300 Passengers were stranded after Washington had grounded all Constellation Airliners. 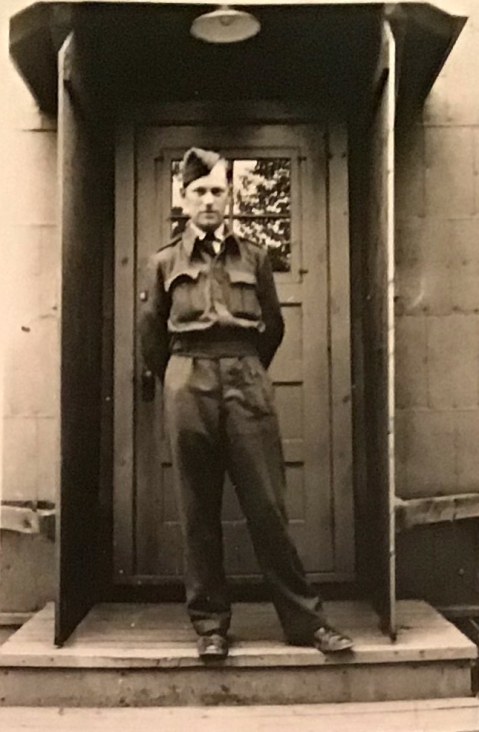 The Airlines “Mess” could accommodate 250 persons at each Sitting and was operated on a 24-hr round-the-clock Schedule, qualified French Chefs, 46 Newfoundland-born Waitresses, 50 Waiters & Kitchen Assistants (10% of them being ex-Servicemen) form the Personnel of the Catering Staff who served meals to the Passengers of about 16 Transatlantic Airlines daily.  If future Air Traffic through Gander warranted it, the Airlines operating the Transatlantic Flights were contemplating the erection of a modern Hotel with every convenience.  BOAC, which had recently abandoned Flying-boat Service from Botwood, Newfoundland was acquiring huge American Airliners, probably Constellations, to operate between Newfoundland & England; and that at time, negotiations were proceeding to put this Route into effect.  Up until the present time, Newfoundlanders going to England could only do so by going to New York or Montreal and backtracking to Gander for the Ocean “hop.”

On 35 Squadron’s Arrival, catering & accommodation had to be shared with 250 Passengers from 5-Lockheed Constellation Airliners as their Aircraft had been grounded for Technical reasons.  Squadron Personnel were entertained at the Airlines Hotel and at Deadman’s Pond.  Craig contemplated setting up a Private Airline to Ferry these Passengers to other Destinations – they could have made a deal of Cash for the Squadron if they could obtain a Charter.  This Cash need became more apparent when they found that Gander dispensed  Beer was 2/- a half-pint.

Deadman’s Pond Hotel – The Squadron stayed at Gander for 4-days while the Aircraft were Serviced.  Town water came from Gander Lake in the Summer and when the Lake froze over in the winter.   Deadman’s Pond was then used for the Water Supply.

Newfoundland then offered the shortest and most feasible Air-route “Stopover” between the continents of North America & Europe.  Newfoundland’s Gander Airport, shrouded for 5-yrs in Wartime Secrecy and hidden from the eyes of all but Service Personnel & Civilian Officialdom is today becoming a familiar meeting place for Air Travellers.   Gander had the 1st Air to Ground & Ground to Air Radio Station in Atlantic Canada.  It also had the 1st Aviation & Public Forecasting Office, the 1st Radio Range Station & Control Tower in Newfoundland.  Increasing Transatlantic Air Travel focused the Aviation spotlight on this important Airbase, taken over by the Newfoundland Government as a Civil Operation on 31st March 1946.  Defence installations, including 100’s of acres of Buildings, Hangars, & Works and including the most modern apparatus for the control of Transatlantic Flying, were transferred under special agreement between Ottawa & London, to the Newfoundland Government for a sum of $1M; a far cry from the millions expended upon this Property during the War years.   There were 100’s of buildings with self-contained units including, 10 large Hangars, a large Base Administration Building & Accommodations for Airmen, Officers, Non-commissioned Officers, Civilian Male & Civilian Female Employees. Some of the support buildings included heating & electrical plants, garages, various Shops, a Parachute drying facility and a large 1,000 seat Theatre where the latest movies were shown.  Bob Hope & Lena Horne were just some of the Stars who brought their Live Shows to Gander. Also situated on the base were dining halls, game rooms, hobby shops, various clubs, chapels & bowling alleys. Transatlantic flights on regular schedule were now being run through Gander Airport by Pan American Airlines;  American Overseas Airlines; Trans World Airlines; British Overseas Airways Corp; Trans Canada Transatlantic Air Lines; Air France and latterly, the Belgian Airlines.  Other Atlantic crossings between Europe & America were being conducted on less frequent schedules by SILA (Swedish Airlines); Danish Dutch Airlines (KLM) & Norwegian Airlines.

12th July 1946 Friday
The organisation for our reception had once again been carefully planned and worked admirably.  Flight Sergeant Stratton, whose home was in Newfoundland, was granted 3-days leave.  Accommodation and catering was made difficult for the Managers, because 5 Constellations (Civil Aircraft) of various Companies had arrived the same day and had been Grounded for Technical reasons. This meant that 250 Civil Passengers had to be catered for in addition to the Squadron. Although this must have strained the resources of the Civil organisation, the food was very good and the arrangements entirely satisfactory.
13th July 1946 Saturday
The Squadron Commander, Wing Commander Craig and the Squadron Adjutant were invited out to dinner by Mr Moore, the Manager of the Airline Hotel and afterwards joined many of the Squadron’s Officers & Airmen at a Dance in the Hotel Ballroom. The old RCAF Officer’s Mess was opened up as a Club for the Squadron’s Airmen for the duration of the stay.
14th July 1946 Sunday
Morning and afternoon assemblies were held and preparations were made for the next Leg of the Flight; Aircraft were Serviced.
15th July 1946 Monday
The Squadron Commander organised a Picnic for all Air & Ground Crews. Transport conveyed the men to “Deadman’s Pond” and Swimming & Sunbathing were thoroughly enjoyed.  An excellent picnic meal followed, which consisted of many of the good things that the Officers & Men had not seen for many years, such as peaches, cream & unlimited quantities of fresh milk. 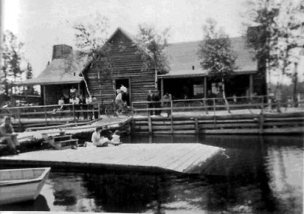 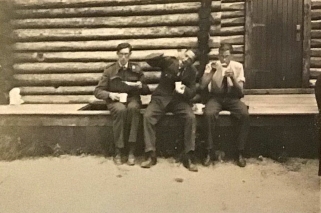 17th July 1946 Wednesday
The Squadron’s 16 Aircraft took off from Gander, Newfoundland, at 10.40 hrs en route for Mitchel Field, Long Island, New York.  They were led by Wing Commander Craig, whose Aircraft TL-F touched down at Mitchel Field on time at exactly 16.05 hours.