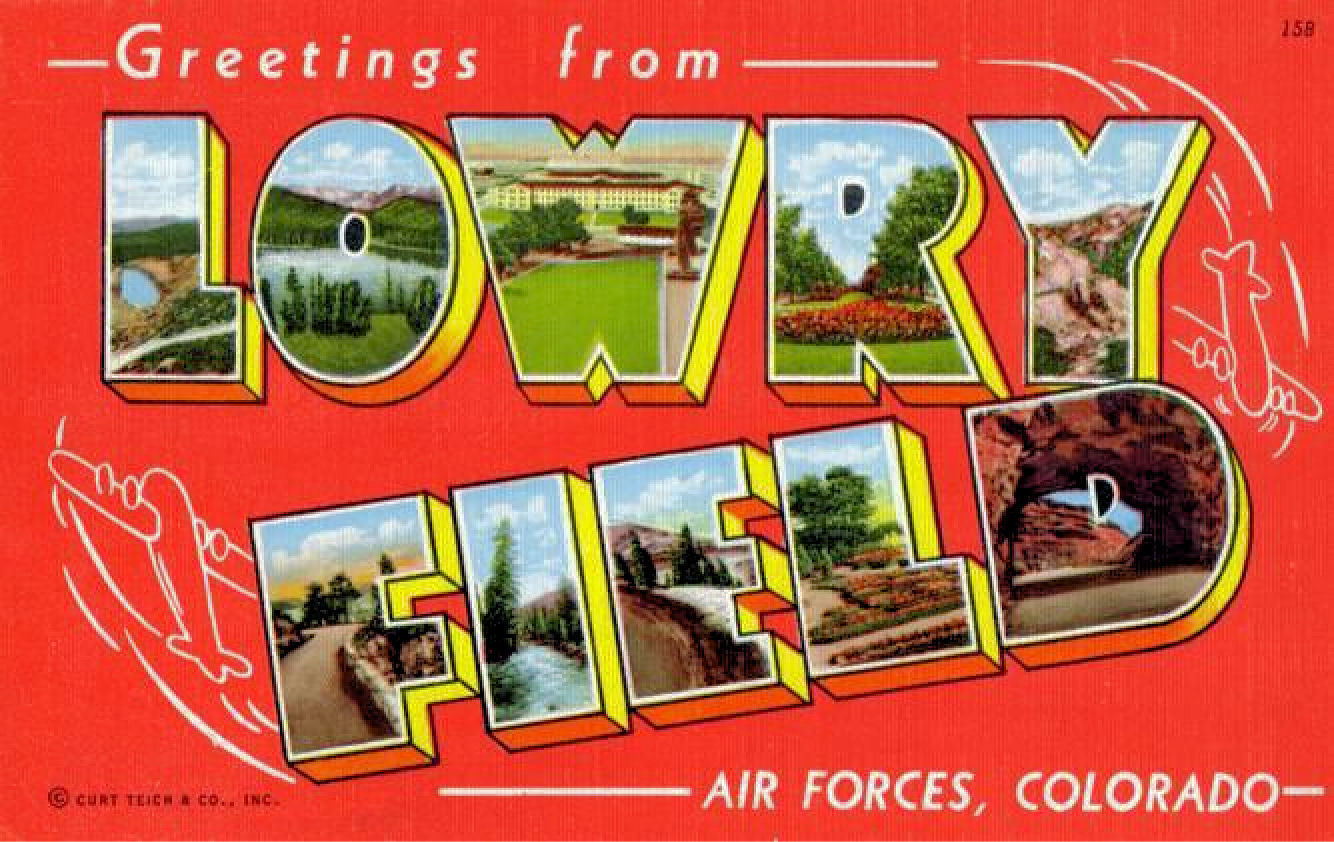 In the 1840s & 1850s as many as 1,500 Arapahoe  Native Americans set up Camp along  Westerly  Creek on land which would eventually be occupied by Lowry Air Force Base.

Aerial View of the Spanish Style Agnes C Phipps Memorial Sanatorium, Denver, Colorado. Constructed by Lawrence Phipps, it served as a recuperation place for victims of tuberculosis. Buildings were later used in conjunction with Operations at Lowry Airfield.

Lowry Field was originally located near East 38th Avenue & Dahlia Street.  It was named after Denver native, US Army Lt Francis B Lowry, who was killed in action during WW1.  In 1937, President Roosevelt Authorised Funds to relocate Lowry Field to its final Site near East 6th Avenue & Quebec Street. The Base started its Training Mission in earnest the following year.

From 1904-1932, Lowry was the Agnes C Phipps Memorial Sanatorium, a 150-bed Facility boasting the curative properties of Colorado’s Climate.  The oldest Structure still standing in Lowry, built in 1904, was a part of the original Sanatorium Campus and is now a Private Residence at 7400 East 6th Ave.

Lowry Air Force Base was named on 11 March 1938 after 2nd Lt Francis Lowry, the only Colorado Pilot killed in WWI Combat.  Lawrence Phipps was paid  $200,000  for the Sanatorium, and the  City of Denver donated the Properties to the Army on 8th December 1937. The Army recommended the Denver location due to its weather and the availability of Land for a Bombing Range…not to mention the acquisition of the Property at no charge to the Federal Government. WW2 caused Lowry to greatly expand its facilities in order to Train Bomber Aircrews along with a large number of other Technical Specialists.  The Denver Branch of the Air Corps Technical School officially became Lowry Field on 21st March 1938.  The paved Runway opened on 4th April (1st used by a B-18 Bolo.)

The Sanatorium’s Main Building became the Army Post’s Headquarters, and the largest single Barracks (3,200 men) was completed in mid-1940.  The “Northeast-Southwest Runway was completed in 1941” (8,550ft).  Beginning 16th July 1940, the 1st Class of the AAF Bombardier Schools was at Lowry and used the nearby Bombing & Gunnery Range through 14th March 1941 Graduating 3 Classes of Instructors who opened the Barksdale Field Bombardier School.  Technical Division, Air Training Command, moved to Lowry AFB on 20th September 1946.  In July 1947, formal Courses in Intelligence Training were established at Lowry for Combat Reporting, Photographic Intelligence, Prisoner of War Interrogation, briefing & Interrogation of Combat Crews.  (In 1927 Charles Lindbergh arrived in his Spirit of St Louis at Lowry Field on a Publicity Tour after his historic cross-Atlantic flight).

Lowry sustained Aerial Operations from 1938 to 1966.  At the time, the main focus for the Lowry Air Force Base was Technical Training, including Aerial Photography.  By the 1950’s, Air & Space Technology came to the forefront, with Missile Specialists being trained at Lowry at a rate of 1,000 per year. During WW2, Lowry became so critical in providing Trained Personnel to the US Military that the Base Population reached 20,000 and operated in 3 Shifts, 7 days a week, 24 hrs a day.  The Lowry Air Force Base Motto,  Sustineo Alas (I Sustain the Wings), may be seen on many of the Historical Buildings that remain in Lowry today.

It was during the 1950s that Lowry became the Summer White House of President Dwight “Ike” Eisenhower and his wife, Mamie Doud Eisenhower.  The 1st Lady’s Family lived in Denver.  The Eisenhowers would travel to Lowry on the Presidential Plane, named The Columbine, just like the Colorado State Flower.  The 1st Couple would attend Services at Chapel No.1, now the Eisenhower Chapel.  The United States Air Force Academy was Established & Located at Lowry from 1955 to 1958 while the permanent Campus was being constructed in Colorado Springs.  The Lowry Air Force Based closed in 1994 after graduating more than 1.1M Armed Forces.  The Base has since been redeveloped.  Several of the original Lowry Air Force Base Structures, including some of the Aircraft Hangars, were creatively repurposed and are still in use

The  1st Aircraft utilised for Training was the famous  Curtiss JN4 Bi-plane,  an  Aircraft that could not get off the ground if both  Pilot & Student wore parachutes,  so they flew without them.

Having left Scott Field, St Louis.  On Thursday 25th July, they went to Lowry Field (East side of Denver) Colorado a 5hr Transit Flight over Missouri and a Fly-past over Kansas arriving in close Formation over Denver for the Open Day scheduled on Saturday 27th July.  It was here that they encountered the only criticism of the Tour.  The Civic Authorities had asked them to Fly over the City of Denver in Formation which they did at 2,500ft Altitude.  The roar of the Merlin Engines caused some 400 Residents to telephone the Authorities and complain about “all this low flying!“.  Group Captain Collard replied that the only complaints received in the Past had been from the people of Berlin!

25th July 1946 (St Louis to Denver)
Fifteen Aircraft of the detachment led by the Squadron Commander left Scott Field for Lowry Field, Denver at 10.32 hours Mountain Time, and flew in Formation over Scott Field, Belleville, St Louis, Kansas City and Denver, landing at Lowry Field at 15.40 hours. The Squadron flew over the Airfield at 15.30 hrs which was the estimated time of arrival.  The Squadron was formally received by Brigadier General T H Lowe & Mr Cyril Ward, the acting British Vice Consul, Denver.  Squadron Personnel were lined up in front of their respective Aircraft and the crew of TL-F, the Squadron Commander’s Aircraft were introduced to Brigadier General Lowe & Mr Ward.

Landing at LowryField with Colorado Hills Beyond

That Evening there was Reception at the Renaissance Room, Mary Reed Library, Denver University hosted by the Chancellor & Mrs Caleb F Gates.  Two days later on Saturday 27th July at 2pm the Gates of Lowry Field Base were opened to allow the Public to Inspect the Aircraft close up and meet the British Aircrews.

Lowry Field held an “Open Day” from 14.00 hrs until 17.00 hrs, during which time Aircrews and Ground Crews stood by their Aircraft which were inspected by the Public.  There was a large attendance and great interest was shown in the Lancasters, their performance, the part they took during the War and the Flight from England. All points were ably explained by both Aircrews & Ground Crews.  In the evening, a Dinner Dance was held in the Officers Club and the Officers were the guests of Brigadier General Lowe & Lowry Field Officers.  A very pleasant & entertaining evening was slightly marred by the Officers having to leave early owing to the Flying Programme the following morning.

Fifteen of the Squadron Aircraft left Lowry Field at 09.35 hrs en route for Long Beach, Los Angeles, California, arriving at 15.00 hrs precisely.  Because of the Altitude of Lowry Field (5190ft), it took all of the Main Runway (8,550ft) to get the Lancs  Airborne and only just at that.  Flying at 11,000 ft in hot & bumpy air, magnificent views of the Rockies were obtained and the Grand Canyon style of Country with large masses of windswept Red Sandstone.  Onwards to Long Beach, California.