Everything was meticulously planned with no detail too small to be ignored. Obviously, to allow 15,000 Troops (corresponding to an entire Army Division on every Trip) freedom to wander at will about the Ship would be to invite Chaos, and to obviate this, each Ship was divided into Red, White and Blue Zones. Before the Troops began to Embark each man was issued with a coloured label indicating the Zone in which he would be Berthed. He was required to wear it throughout the Voyage, and for him, any other Zones were strictly out of Bounds.

The Troops messed in the Ship’s Main Restaurant, 2,000 sitting at each meal. Each man was issued with a coloured card indicating his meal Time, which had to be rigorously observed.  The preparation of over 30,000 meals a day was a colossal task for the Kitchen Staff who were commonly assisted by Fatigue Parties drawn from among the Service Passengers. The Troops themselves provided their own eating utensils and were additionally required to assist the Kitchen Staff by doing their own washing up in specially installed equipment. The time at Sea was not spent entirely in lining up for meals. Troop Accommodation had to be cleaned for daily inspection, and there were the regulation Boat & other Drills, which all Ranks were required to attend, and to which they would be mustered by the PA System that reached into every corner of the Ship. There were eagerly awaited News Bulletins & Impromptu Entertainments & Film Shows arranged to accommodate all who desired to attend, and well-stocked Ship’s Canteens allowed the men to purchase anything from Coca-Cola to Shaving Soap. 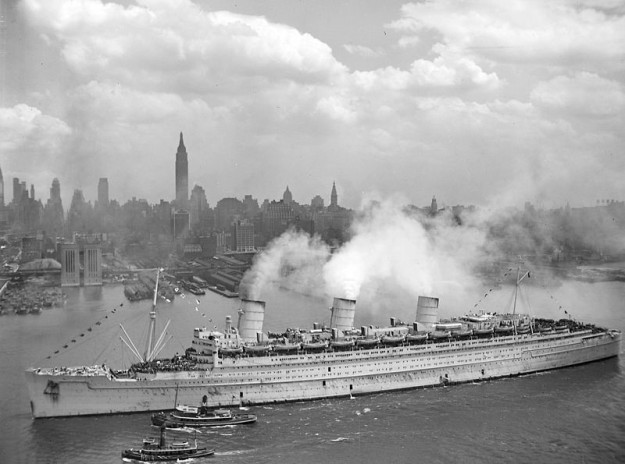 In the WW2 Conversion, the Ship’s Hull, Superstructure and Funnels were painted Navy Grey. As a result of her new ‘colour’, and in combination with her great Speed, she became known as the “Grey Ghost.” To protect against Magnetic Mines, a Degaussing Coil was fitted around the outside of the Hull. A Degaussing Ship fitted a copper cable along its outer Hull—projecting a “North Pole Up” Field that neutralised the Ship’s magnetic signature.
Initially, Major Warships & Large Troopships had a Copper Degaussing Coil fitted around the perimeter of the Hull, energised by the Ship’s electrical system whenever in suspected Magnetic-mined Waters. Some of the 1st to be so fitted were the Carrier HMS Ark Royal and the Liners RMS Queen Mary & RMS Queen Elizabeth, it was a photo of one of these Liners in New York Harbour, showing the Degaussing Coil, which revealed to German Naval Intelligence the fact that the British were using Degaussing methods to combat their Magnetic Mines. This was felt to be impracticable for the myriad of smaller Warships & Merchant Vessels, mainly because the Ships lacked the generating capacity to energise such a Coil.  It was found that “wiping” a current-carrying cable up and down a Ship’s Hull temporarily cancelled the Ships’ Magnetic signature sufficiently to nullify the threat. This started in late 1939, & by 1940 Merchant Vessels and the smaller British Warships were largely immune for a few months at a time until they once again built up a Field.

Inside, Stateroom Furniture & Decoration were removed and replaced with triple-tiered wooden Bunks (which were later replaced by standee Bunks).  Six miles of carpet, 220 cases of china, crystal & silver service, tapestries & paintings were removed and stored in Warehouses for the duration of the War.  The woodwork in the Staterooms, the Cabin-class Dining Room and other Public areas were covered with leather.  Queen Mary & Queen Elizabeth were the largest & fastest Troopships involved in the War, often carrying as many as 15,000 men in a single Voyage, and often travelling out of the Convoy and without an Escort.  Their High Speed made it difficult for U-boats to catch them.

Contemporary Report
After Crossing the Atlantic on the 27-yr old “Queen Mary“, we trained briefly in Canada before travelling by Rail to Miami.  From there we crossed over to Nassau on the 640 Tonne MV Jean Brillant. This Craft looked rather small but our Group consisted of only 30-Passengers.  Setting off on a beautiful evening with music playing and coloured fairy lights stretching out to Sea, but events took a sudden change.  Two hours later, we were being flung about like a cork in the midst of a terrifying Storm.  Arriving in Nassau Harbour next morning, several hours past our scheduled time, we came ashore bruised & battered by kit & unsecured Iron Beds & Loose Cargo which had been flung from one side of the small Vessel to the other all during the Night Crossing.  Medical attention was required to deal with sprains, bruises, & other injuries.  We had, therefore, gained early, the 1st-hand experience of the vagaries & wild mood swings of the Caribbean before even starting our Flying Training but at that point, we had never even heard of the Bermuda Triangle.  It would appear that none of the Permanent Staff of Qualified Instructors whose Training Duties required them to Fly regularly over this suspected area had experienced anything unusual.