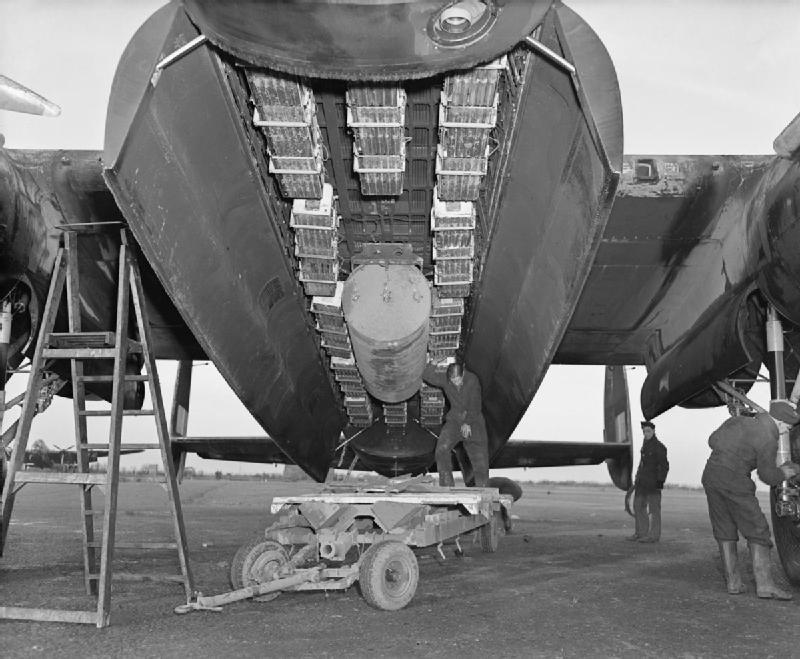 During WW2 the Lancaster was the most successful bomber used by the RAF and the RCAF. The Lanc had speed, ceiling, and lifting power that no other Aircraft of the day could match.  Weighing 36,900 lbs empty, the Lancaster was capable of taking off with an additional 33,100 lbs of fuel and Bombs; in other words, it could almost carry its own weight again.  The Lancaster carried 64% of the tonnage dropped by the RAF and RCAF during the War. The “Grand Slam“, a 22,000-lb special purpose bomb designed to penetrate concrete and explode below the surface to create an earthquake effect, could only be delivered by the Lancaster and the Lancaster was thus chosen for special operations such as the “Dambusters” raid and the attack which sunk the German Battleship Tirpitz.

The Lanc’s massive bomb bay stretched for 33 ft x 10 ft and, unlike other bombers, was one continuous uninterrupted space. Partly for this reason, the Lanc had the versatility to undertake raids with large, specialized weapons. However, this meant that the main wing spars became obstacles to movement within the Aircraft, particularly for Airmen wearing heavy clothing and flight boots.

The Lancaster was ideally suited to carrying large single weapons and its performance alone placed the bomber ahead of the Halifax and Stirling for the famous Rhur Dams Raid.  Not a large weapon in its own right, the unusual shape of the Upkeep Mine resulted in Bomb Bay modiﬁcations which would prove useful when the Tallboy and 10 Tonne Grand Slam Weapons arrived from the summer of 1944

Although non-standard weapons, such as the 5,000lb Capital Ship Bomb, had already been delivered by the Lancaster the 1st Device that required the Aircraft to be modiﬁed was the Barnes Wallis-designed 9,250lb Upkeep Mine (Vickers Type 464). The weapon was carried between a pair of large callipers which released at exactly the same time for a clean drop. To continue the bombs clean trajectory and its skip across the water, the weapon was spun backwards 10 minutes before being dropped by a Vickers Jassey hydraulic motor mounted on the Starboard side of the Mine.  Power for this motor, which spun the Mine via a belt drive, was drawn from the same system which operated the Mid-upper Turret, which was removed.  The Lancaster was also ﬁtted with a pair lights, forward and aft on the lower fuselage, their beams converging to become one when the correct delivery height of 60ft was achieved.  23 Aircraft were converted to carry the Upkeep Mine which was successfully employed for the unique Operation carried out in May 1943 by 617 Squadron against the Ruhr Dams.

The next Wallis’ Brainchild was the 12,000lb Tallboy bomb, an Earthquake Weapon designed to be dropped from 40,000ft. The bomb was 21ft long and 38in in diameter but clever modiﬁcation of the Lancaster’s capacious bomb bay still meant that the Weapon could be carried internally with an additional drop gear hitch. Special Stabilizing Automatic Bomb Sights (SABS) were ﬁtted to each Bomber.  The 1st of 700 Tallboys was dropped during a Raid on a Railway Tunnel near Saumur on 8/9th June 1944, once again by 617 Squadron. The Tunnel was blocked for the remainder of the War and crucially at the time prevented the movement of a Panzer Unit to the Battlefront.  The 1st of 42 Grand Slam bombs was also delivered by 617 Squadron on 14th March 1945 when Sqn Ldr C C Calder attacked the viaduct at Bielefeld.  The Earthquake eﬀect of the Bomb reduced the central span to rubble despite falling 100 yards away from the Viaduct.
Tallboy – 21ft long, 3ft 8in diameter @ 12000-lbs
Tallboys were dropped from as low as 20,000ft, and created  80ft deep x 100ft across craters and could penetrate 16ft of reinforced concrete.

The 22,000lb Grand Slam was 26ft 6in long and 3ft 10in across which meant even the Lancaster would not be able to carry this devastating weapon internally.  Extensive modiﬁcations would be needed, which included reducing defensive armament to a pair of machine-guns in the Rear Turret.  As with the Tallboy Aircraft, better performing Merlin 24 Engines were ﬁtted. The Bomb Bay doors were completely removed and the rear end was chopped to clear the Tail of the Weapon. The front end of the Bomb Bay was curved upwards to match the line of the front of the Grand Slam. 32 Aircraft were converted to carry the Grand Slam.

With its single, substantial strap swinging freely a Grand Slam gently spins away from Lancaster B Mk I (Special) PB996. Only 42 Grand Slams were dropped in anger before the War’s end; this Aircraft alone dropped 4 of them on the Arnsberg Viaduct, Railway bridges at Nienburg and Bremen and the Farge U-boat pens.
Grandslam – 26ft 6in ft long @ 22000lbs – Ten Ton Tess
In the raid on the Submarine Pens near Bremen, one Grandslam penetrated 23ft of reinforced concrete.

Diagram showing the installation and bomb mount points for the 22,000 lbs “Grandslam”

The 4,000lb Cookie had a dia of 30″ while the 8,000 & 12,000 lb ones had a dia of 38″ which probably accounted for the requirement for Bulged Bomb-doors. The 12,000 lb Tallboy version was like the 8,000 lb bomb with an extra section and tail fins.  The Tallboy bulged doors, they stood proud at the rear of the Bomb-bay presumably to clear the Tallboy’s Fins.  However, the Blockbusters didn’t have Fins and were the same diameter as the normal 4,000 lb ‘Cookie’.  They had little problem fitting the 8,000 lb bomb in the standard Lancaster bomb bay, so bulges were only required for the 12,000lb Tallboy version.  “With no bomb doors, the Aircraft was likely set up and configured to drop 12,000 lbs HC “Blockbuster” bombs. These consisted of 3 x 4,000 lbs HC “cookies” bolted together and dropped as a single bomb, No.617 Squadron was to drop these later in 1943.

Diagram showing the installation and bomb mount points for the 4,000 lbs HC “Cookie”

Within the RAF non-trade specific jobs such as the flight line servicing of Aircraft. As well as sweeping bomb dumps, painting boxes,various other shit jobs, prepping, maintaining and loading Aircraft Bombs, Missiles and Aircraft assisted Escape Systems they are also responsible for the maintenance of small Arms within Station Armouries like the L85A2 (SA80), 9mm Browning Pistol and the GPMG (General Purpose Machine Gun). Armourers can also volunteer to specialize in Explosive Ordnance Disposal and are often employed  clearing Airfields from any unexploded ordnance (UXO). They can also work alongside their Army equivalents the Ammunition Technician or ATO helping to deal with Improvised explosive devices. The founder of the RAF Lord Trenchard held the Armourer in high esteem and was quoted saying “The Armourer, without him, there is no need for an Airforce“.