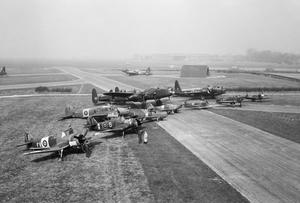 The Planes used were Blenheims & Wellingtons (Wimpys). The Drogue towing Planes were Lysanders & Jainey Battles.  The Air Gunners were on Weekly Courses and after Lectures performed Gunnery Practice. They flew in Wellingtons, the Guns of which were loaded with different coloured Bullet tips. The Drogue Planes flew up & down over a Course at nearby Theddlethorpe, each Plane carrying 3 Drogues which were streamed from the Plane by a long wire. The Gunnery Planes flew alongside the Drogues with the Gunners taking it in turns to Fire at them with their different coloured bullets. Afterwards, the Drogues were returned to Theddlethorpe where the holes were counted and accorded to the Gunner who had fired the Colours. Each man had to make a certain number of Hits to Pass. Resources being scarce the Drogues were then repaired for future use on another occasion in much the same way as Parachutes.  Eventually, the Blenheims & Wimpys were replaced by the Lancaster & the Halifax, and the Towing Plane by the Masters.

Air Warfare Joint Reconnaissance Centre
The UK’s National Strategic Imagery Intelligence Provider. In the immediate Post-War years. One of its major tasks was the plotting & analysis of captured German Air Force reconnaissance photography.  What had not been destroyed, or captured by the Soviets, was discovered in several locations by the Allies & Shipped back to the UK.  The Joint UK/US work on this Imagery provided unique Intelligence on the Soviet Union & Eastern Europe during the early Cold War years before the advent of Satellite Imagery.

Air Warfare Joint Reconnaissance Centre
All Weather Jet (Meteor) Refresher Course
The Nucleus of the Staff of the Empire Central Flying School was transferred to RAF Manby to open the Flying College in 1946.  Manby later became the home of the College of Air Warfare, part of which was the School of Refresher Flying.  A Metal Screen 800 yards long and 50ft high was erected at RAF Manby to Test Landings in Cross-winds. 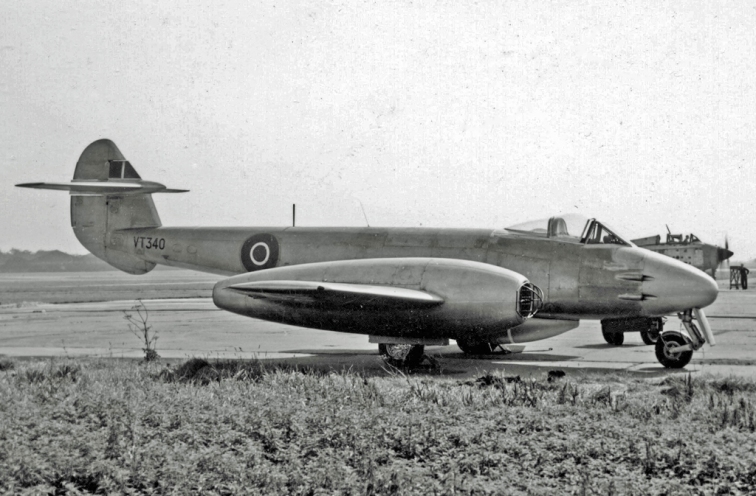 3rd – 7th February 1955 – English Electric Canberra TMU4 – 1st Trainer Variant with Dual Controls and a Crew of 3.  To enable Crews to Convert to Flying the Canberra, a Trainer Version was developed to meet Air Ministry Specification T2/49.  The Prototype designated T4 1st flew on 12th June 1951. It was the same basic design as the B2 apart from the introduction of side-by-side Seating for the Pilot and the Instructor and the replacement of the glazed Nose with a Solid Nose 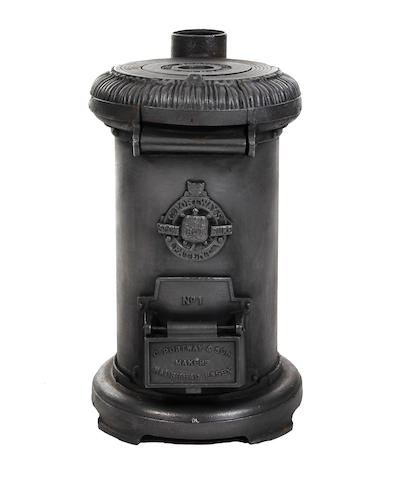 onditions there in the Winters were severe, this being the Fens, and the icy winds blew over the Airfield as if in the Arctic, a single Tortoise Stove (A free-standing wood-burner) providing the only source of heat.
The Tortoise Stove dates from 1830, when the 1st was hand-built by Charles Portway to heat his Ironmongery Store in Halstead, Essex. After making a 2nd Stove for a neighbour, Mrs Portway suggested he go into Business Manufacturing & Selling them, so he established a small Foundry and went to work.  This proved so successful that in the next 50 years over 17,000 of his Stoves

were sold and provided low-cost & economical heating to many 1000’s of people.  A Solid-fuel Stove may be judged by how slowly it consumes the Fuel, and these 1st Stoves were successful simply because they took so long to burn one filling, thus extracting the maximum amount of Heat from the Fuel. So slowly did Portway’s Stoves burn that they were named Tortoise Stoves, and each was produced with the motto ‘Slow But Sure Combustion’ proudly displayed with the Tortoise Trademark. This made them possibly the 1st heating appliances where economy was a featured selling point.

If there had been heavy snow a System code-named ‘Exercise Snowflake’ was put in place during which all those on Watch Duty had to report to the Hangars, collect a spade and start clearing.  It was so cold out there that Personnel never enjoyed anything more than the Hot cocoa that the NAAFI Wagons came up with whilst they worked.

Many Bomb Disposal techniques were invented at Manby, often a Baptism by Fire.  By June 1940, RAF Manby housed the Joint Services Bomb Disposal School. Royal Engineers & Royal Navy Demolition Parties being Trained alongside their RAF counterparts. In August 1940, the Bomb Disposal workload, generated by the ever-increasing Enemy activity, led to the establishment of 25 mobile Bomb Disposal Squads, increased in manpower strength from 3 to 25 Personnel each.   Manby had existed prior to the War as a permanent Station complete with large brick built Barracks, large Headquarters & Classrooms.  Manby was Guarded by the Army, the Sherwood Foresters and the Durham Light Infantry.  Later on the RAF took over and the Army left.

RAF Strubby came under RAF Manby RAF Flying College from VJ-Day until Closure in 1972.  The nucleus of the Staff of the Empire Central Flying School was transferred to RAF Manby to open the Flying College in 1946.  On 29th July 1949,  it was passed on to the RAF Flying College, RAF Manby.  At the same time it was announced that, from 1951, the Airfield would become a Relief Landing Ground to be used by a large Range of Aircraft of the RAF Flying College.  The reason was that its Long Runway made it better suited to Jet Operations than Manby.  As a result, the Airfield began to see use by DeHavilland Vampires, Gloster Meteors & Avro Athenas. The Vampires did not remain long: they were withdrawn from RAF Service the following year.  In 1953, English Electric Canberra Bomber Aircraft started to arrive.  In 1954 the Main Runway was extended and an Operational Readiness Platform was built. Over time, some additional work was carried out to Airfield Facilities, most notably a modern ‘Glass House’ on top of the existing Wartime Control Tower.  In July 1955, Gloster Meteors of 3 All Weather Jet Refresher Unit arrived at Strubby and replaced the outgoing Avro Athenas.  Just before the end of the same year, the 1st Hawker Hunters had started to arrive.  With all the Tenant Units (Canberras & Hunters of the RAFFC & Meteors of the Air Warfare Joint Reconnaissance Unit), the Station was Operating at full capacity again.

Manby later became the Home of the College of Air Warfare, part of which was the School of Refresher Flying.  (All Weather Jet Refresher Course)   As a Member of the Crash Crew in 1951/52 at RAF Strubby, Les Featherstone attended a Vampire Crash into a Farmyard.  The Pilot was Wing Commander Steventon. He bailed out, but his Parachute did not open, and he crashed through the Farmhouse Roof. The Farm was local between Strubby & Mablethorpe.

In Oct 1954 a Canberra Bomber belonging to the RAF Flying College, Manby, makes the 1st Jet Flight over the North Pole.

RAF College of Air Warfare, Manby – Manby boasted one of the finest Officer’s Messes in the RAF.  Later sadly neglected after closure and then caught fire

In 1963 the Navigation Wing of the Central Navigation & Control School moved to RAF Manby from RAF Shawbury, leaving Shawbury the task of all aspects of ATC Training as the Central Air Traffic Control School.  The Base closed in 1974. Today the Site is used for Agriculture, the Hangers are used as a Grain Store, with other buildings being used for Industry.  It is also home to Manby & District Model Aero Club.

Cranwell assumed Control of all University Air Squadrons, and in January 1974, the College of Air Warfare was moved from Manby to Cranwell to become the Department of Air Warfare. During 1973 & 1974, the Supply & Secretarial Officer Training Squadrons were transferred from Upwood, and the Department of Engineering became the Department of Specialist Ground Training. However, because of Accommodation problems, the Secretarial Officers’ Training Squadron was subsequently moved to Hereford. In April 1976, the Central Flying School was transferred to Cranwell from Little Rissington, before moving to Scampton in November 1977.