HMS Truculent had sank in the Thames Estuary after a collision with the Swedish vessel Divina on the evening of 12th January 1950. There was horrendous loss of life, only a few of the casualties died in the immediate sinking but many of those who escaped from the badly stricken vessel were washed away by the ebb tide and died of drowning or exposure.

On 12th January 1950 HMS Truculent sailed from Chatham to carry out trials, having just completed a refit; in addition to her normal crew compliment she was carrying an additional 18 dockyard workers. The trials complete she set a course for Sheerness, which would take her through the Thames Estuary at night. At 7 o’clock a ship showing 3 lights appeared ahead in the channel.  It was decided that the ship must be stationary and as Truculent could not pass to the starboard side without running aground, the order was given to turn to port.  At once the situation became clear as the cargo ship MV Divina came out of the darkness: the extra light indicated that she was carrying explosives and not anchored.  A collision was then unavoidable.  The 2 vessels remained locked together for a few seconds before the submarine sank hanving been severely breached amidships.

With her stem twisted and a shapeless mass of metal at the waterline, the Swedish motor-tanker Divina was tied up early this morning alongside the destroyer Undine at moorings in the Medway off Port Victoria. Her bow compartment was flooded. Other obvious signs of the collision with the submarine were a damaged anchor and a length of steel plating, apparently from the Truculent, attached to her starboard bow. The ship, of 643 tons, was on passage from Purfleet to Ipswich with a cargo of paraffin when the accident occurred last night. Captain Hommerburg described to-day how he ordered the crew, who include 4 Swedes, 4 Germans, and 2 Spaniards, to launch a boat in which they picked up 8 of the submarine’s crew. The account was amplified by the only Englishman aboard, a deckhand named Clarence Downs, 21, of Byker, Newcastle Upon Tyne. Engaged on his second sea voyage, he had been below for a few minutes after coming off watch when, he said, there was a crunching sound forward and the ship lost weigh with a jerk. When the crew emerged on deck they found that the ship’s floodlights had illuminated the surrounding water.

“There was then no sign of the submarine, and at first we who had been below did not know what the trouble was,”  he continued. “On instructions from the Captain, we launched the ship’s lifeboat to help the men who were shouting in the water.”  Some of those picked up were wearing lifebelts. None was fully dressed, and all were affected by oil from the submarine which had entered their eyes. They were transferred later to the frigate Cowdray, which reached Chatham shortly before dusk to-day. Captain Hommerberg said: “We had picked up a pilot, and both the pilot and myself were on the bridge when the collision came. It was dark but clear, and we saw the submarine ahead and gave warning of our approach. The crash came with an impact that shook us from stem to stern, and we saw the submarine sink immediately – in one minute. We saw men in the water, and my crew rushed to get them out. Ropes and lifebelts were thrown to them, and we also launched our boat. We managed to pick up 8 survivors and 2 dead men. We gave the survivors a cup of coffee, and then the lifeboat took them off and transferred them to a destroyer. We stayed on the scene cruising around for 4 hours, continuing to search for survivors.”

There was an almighty crash and I was pinned to the side of the conning tower as Truculent keeled over at a crazy angle.  There was a sickening lurch and, in seconds, we sank like a stone to the seabed 80 feet below.  The conning tower was flooded and I knew that somehow I had to get clear.  I managed to squirm round the periscope standards and, remembering my crash drill, breathed out as hard as I could.  I found myself on the surface, swimming aimlessly in the darkness.  The water was icy cold.  I could hear men calling for help but couldn’t see them.  I lost all sense of time.  Vaguely, I realised that the tide was on the ebb and that I was being swept slowly out into the North Sea.  I was almost past caring when a boat from the Dutch freighter, Almdijk, picked me up.  It turned out that I had been in the water for over an hour.  It was only later, when they told me that 64 of my shipmates had perished, that I remembered the unusual order to fetch the seamanship manual.  The officers on the bridge had been puzzled by the arrangement of lights on a ship and had sent for the seamanship manual to check them.  If I hadn’t gone aloft with it, I would almost certainly have drowned. – Leading Seaman Fredrick Henley 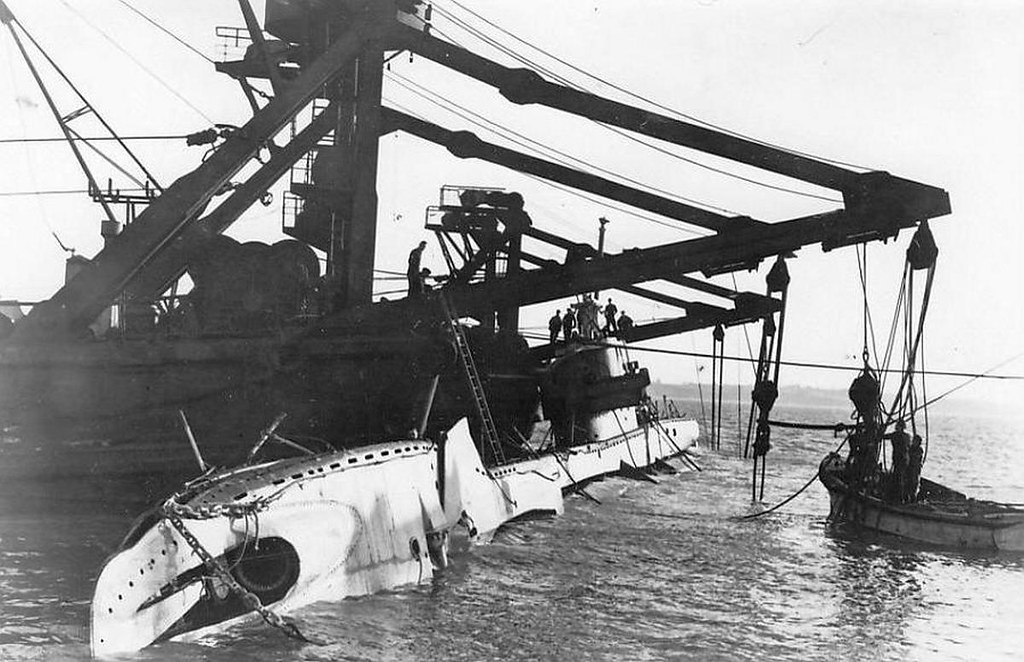 Footnote:  HMS Truculent had collided with the 600-ton Swedish tanker Divina, a vessel with specially strengthened bows for Arctic navigation conditions.  The submarine suffered a massive gash forward on the starboard side and sank rapidly.  At a subsequent courts-martial, Lieutenant Bowers was found not guilty of negligently losing his ship, but was severely reprimanded on the lesser charge of negligently hazarding her.

“On the evening of 12th January 1950 HMS Truculent was proceeding on the surface from the submarine exercise area to Sheerness on completion of Dockyard trials, for which a party of Chatham dockyard Officers and men were also on board. The SS Divina, with a Trinity House Pilot on board, was on passage from the Port of London to Ipswich and at the time of the collision, shortly after 7pm, was in the vicinity of the .  For some time before the impact each vessel had the lights of the other in sight….”.

The subsequent Board of Enquiry report states that: (The submarine) entered the Thames Estuary through Princes Channel, thence passing between Red Sand Sheal and Shivering Sand Fort on course 280⁰.  Her speed was about 9 knots through the water.  In Oaze Deep, course was altered to 261⁰. The collision occurred with SS Divina in position 1 mile bearing 287⁰ from Red Sand Tower.  There wewre 15 survivors.