The Mark XIV Computing Bomb Sight was a Vector Bomb Sight developed and used by the RAF’s Bomber Command during WW2.   The Bomb Sight was also known as the Blackett Sight after its primary Inventor, Patrick M S Blackett a Nobel Physics Prize Winner.  Prof Blackett volunteered to design a new Sight to meet the needs of Bomber Command. He was given facilities at Farnborough and the services of a small Team of Engineers. The Bomb Sight that resulted was the Mk.XlV regarded then as the wonder Sight of the day.  It was designed to enable the run-up to the Target flying straight & level to be restricted to a mere 10-secs and enable the Pilot to carry out evasive manoeuvres on his approach to the Target.  It could be used to Bomb both on the climb and the glide. The Bomb Sight consisted of a Computor Cabinet mounted to the left of the Air Bomber and a stabilised Sighting Head with Optical Graticule.  The Sight was one of the 1st practical uses for a Mechanical Computor.

The request for a new Bomb Sight was quickly passed on to the Royal Aircraft Establishment, where Patrick Blackett of the Aeronautical Research Committee volunteered to lead the effort.  His solution to the problem was a dramatically updated version.  The key advance to the Blackett design was the way the Sighting Head was aimed.  Instead of dialling the Parameters into the Sight directly, these inputs were dialled into a separate Console.  The Console was equipped with repeaters for each of the Aircraft Instruments needed to operate the Sight, like Altitude & Airspeed. The operator simply turned the dials on the Console so their Indicator arrows matched the readings on the Instruments displayed in the same location, known as laying needle on needle.  This eliminated the possibility the numbers would not be updated as the Bomber manoeuvred, but required so much manual working that a new Crew member, the Bomb-Aimer’s Mate, was introduced to operate the Console.  The inputs operated by the Bomb-Aimer’s Mate drove a Mechanical Calculator inside the Console, or Computor, (as it was then spelt).  The output of the calculator drove flexible shafts that rotated the Sight Head to the proper angles in Azimuth & Altitude, representing the Wind Drift and Range Angle. The Sight head itself replaced the older wire cross-hairs with a modern Reflector Sight that was easy to see at Night. The Sight could be rotated manually to Sight on objects well in front of the Aircraft, allowing the Bomb Aimer to select a wider variety of objects to use for drift measurements. 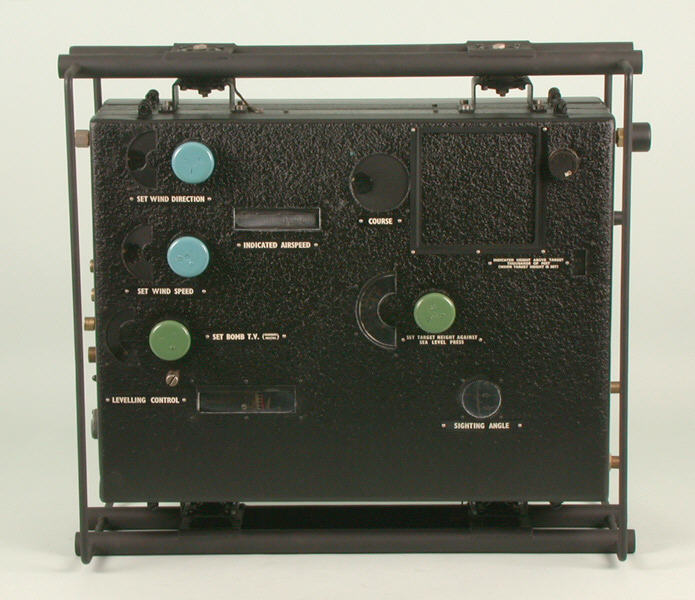 Blackett’s Solution
The resulting Mk.XII Bombsight was 1st Tested in September & October 1940, and by the end of October, 20 examples had been constructed.  A slightly improved version, the Mk.XIII, was also designed, but not put into production.  By late 1942 the Handley Page Halifax was being delivered with the Sight Head already installed.  In May 1943, Bomber Harris requested that the maximum Bombing Altitude be increased from 20 to 30,000ft, as the Avro Lancaster Units were now carrying out missions as high as 22,000ft. The Air Ministry responded with a compromise improvement of 25,000ft and a more accurate angle mechanism.  These changes produced the Mk.XIVA which arrived in December 1944.  The A Model also introduced the ability for the minor differences in Instrument Readings for indicated and true airspeed between Aircraft to be corrected simply by replacing a cam.

The resulting Mk.XIV was 1st Tested in June 1941.  It was the 1st modern Bomb Sight that allowed for accurate Bombing immediately after radical manoeuvring, with a settling time as little as 10-secs. The fast settling time was invaluable during Night Bombing Missions, as it allowed the Bomber to fly a helical path, both climbing & turning, and then level out immediately before the Drop. Even slow turns made it difficult for Night Fighters to track the Bombers within the limited view of their Radar Systems, and continually changing Altitude is an effective way to avoid anti-Aircraft fire.

Changes were made in the overall design of the Computer Cabinet to reduce the number of manufacturing operations required.  The Tubular frame which surrounded the computer Cabinet was modified to reduce the amount of welding necessary.  All threads used on components were changed to American standard threads. Die-castings were extensively used where ever possible in the sub-assemblies. Sintered oilite sleeve bearings replaced ball bearings.  The higher standard machine & cutting tools available to the Americans further improved the output.

The new design reduced the Bomb Aimer’s setup workload to dialling in 4-Settings, 2 of which could be pre-set before the Mission. The 2 pre-set values were the Altitude of the Target over sea level, and the Bomb’s Terminal Velocity, a function of its design.  The only settings adjusted in-Flight were the measured Wind direction & speed.  The Altitude, Airspeed & Course were all measured by the internal instruments, and presented to the user in windows on the side of the Computor Case. Once set, the computor could be left alone and automatically updated the Aim Point, moving the Sighting Head as well as displaying this as the Bombing Angle in another window.  The computor could even account for steady changes in Altitude, allowing the Bomb Run to take place in a shallow climb of up to 5°, or Dive of up to 20°.  The Mk.XIV consisted of 2 independent parts, the Sighting Head and the Computor.  The Sighting Head was located in the Bomb Aimer’s window at the front of the Aircraft. The separate Computor Cabinet was assembled with the operating knobs positioned on the right side of the case, so it had to be placed on the left side of the Fuselage. The 2 were connected via 2 flexible cable drives.

The Sight Head was much smaller & lighter than the older versions. This greatly reduced size meant that the Sight Head was easy to mount on a Stabiliser System, adapted from the same Sperry Gyroscope as earlier experiments. With the Sight Head Stabilised, the Bomb Aimer could continue to measure Drift even as he indicated turns to the Pilot, eliminating the need to correct, re-measure, correct again, etc.  Moreover, the remote Console and 2nd Operator eliminated the need for the Bomb Aimer to look away from the Sights to make adjustments while on the bomb run.  As a result of these changes, short aiming periods of a few secs would be enough for an accurate drop.

Stabilised Automatic Bomb Sight (Precision)
The SABS consisted of 3 primary parts, the Bomb Sight itself, also known as the “Range Unit”, the Stabilising System, and the “Bombing Directional Indicator” for the Pilot and other Indicators, The SABS briefly saw use with the Pathfinder Force before being turned over to No.617 Squadron RAF, the famed “Dambusters”, starting in November 1943. This Squadron’s Avro Lancasters were undergoing conversion to dropping the 12,000 pounds (5,400 kg) Tallboy Bomb as a precision weapon, and required the higher accuracy of the SABS for this Mission. In this role the SABS demonstrated superb accuracy, routinely placing Bombs within 100 yards (91M) of their Targets when dropped from about 15,000ft (4,600M) Altitude.  The System remained hand-built throughout its history and was produced in small numbers. In the end, the 617 would also be the only Squadron to see Operational use of the SABS, using it with the Tallboy and the larger 22,000-lbs (10,000 kg) Grand Slam.

Less than 1,000 SABS Bomb Sights were manufactured and after the War great difficulty was experienced in finding sufficient Sights to equip 2 Lincoln Squadrons for Precision Bombing against Japan. Compare this with the 23,000 T1 Sights manufactured in America. There was in Bomber Command at the time much discussion on the comparative merits of the 2 Bomb Sights. The SABS although potentially more accurate lacked the degree of tactical freedom afforded by the MkXlV/T1. As a result the MkXlV/T1 was known to Bomber Command as the ‘Area’ Bomb Sight of the RAF and the SABS as the ‘Precision Sight.’