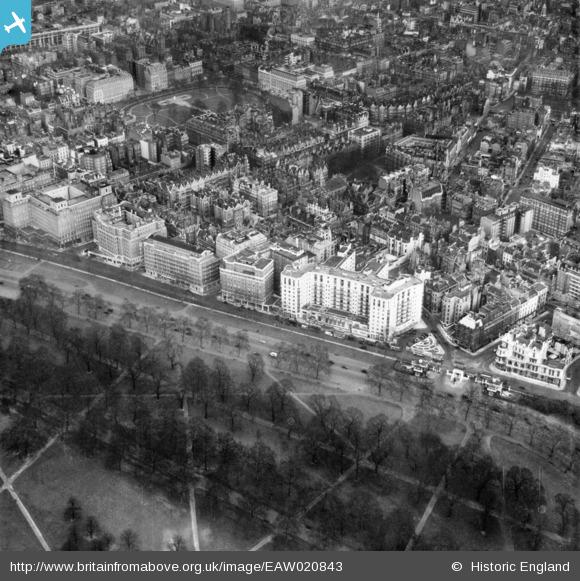 The President and Council of the Pathfinder Association were the hosts at a dinner given at the Dorchester Hotel, London, on Friday, March 11th , as a prelude to the Bomber Command Reunion the next evening.  As we briefly mentioned last week, in publishing a photograph of some of those present. Marshals of the Royal Air Force Lord Trenchard and Lord Tedder attended. They were welcomed by the chairman, W/C. J. C. MacGown, D.F.C., M.D., who said in his speech that it was a great honour and a landmark in the history of the organization to entertain them. All the guests, he remarked, were present because they were interested in the welfare of Servicemen and ex-Servicemen.  He paid tribute to Lord Trenchard, of whom he said that it was almost time he was called “the grandfather of the RAF”  W/C MacGown also associated Pathfinders with General Eisenhower’s remark concerning Lord Tedder – that he was lucky to have had his services and that he had won the respect and admiration of all. He was a good mixer and a good Airman.  To Lord Rothermere and The Evening News (to which he added also the names of Mr. Guy Schofield, the Editor, and Mr. Cyril Birks) W/C. MacGown said “Thank you for making the 1st Bomber Command Reunion (12th March at the Albert Hall) possible.” Another guest who was thanked for his co-operation in the organisation of the great Reunion was Air Marshal Sir Robert Saundby, wartime deputy to Air Marshal Harris and, incidentally, chairman of the RAFA. Finally, thanks were given to A. Cdre. A S Ellerton, Air Ministry, and Mr. MacBride and Mr. Parsons.  The fact that the Albert Hall could have been filled twice over for the Reunion showed that the spirit was still alive, and the Pathfinder Association was glad to do anything it could to help that spirit. 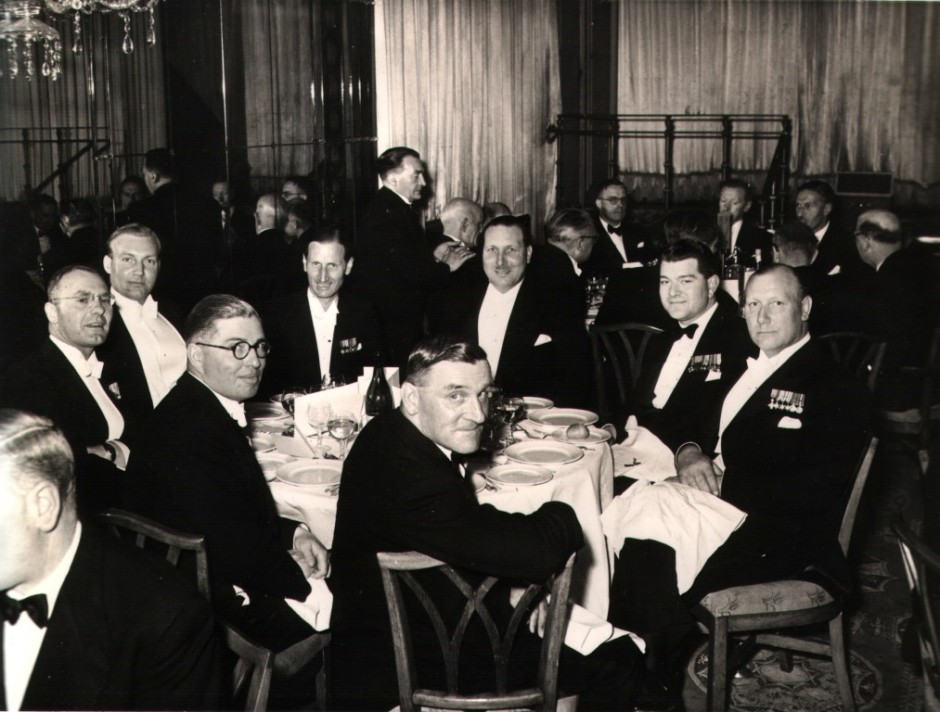 Lord Tedder, speaking for the guests, first complained that he had had inadequate briefing when he was detailed to reply.  He had no prior knowledge of the gaggle to whom he was speaking, but he could see there were some “heavies” present and also some “very light stuff.”  He was honoured to reply for the “1st Pathfinder of the Air Force.”  The Chief of Airstaff  said that he would give anything for the honour of wearing the Pathfinder Symbol. Both low and high levels had taken exception to the wearing of the symbol – low levels, he suspected, – for reasons of jealousy, and high levels probably through – a mistaken sense of tradition. But that little symbol was worth more than a jewel to people who had earned the right to wear it.  It might not be conventional but it was beyond price to the people who wore it and to the Air Force of whom they were a part.

Value of Pathfinder Association
Lord Tedder said that the object of the Pathfinder Association was to keep alive the comradeship of the PFF and of a part of the Air Force.  This was not just “an old boys’ party for a line – and lie-shoot,”  But something constructive.  It was grand in one particular way. Some were in uniform and some in strange garbs: he remembered meeting one recently at Gatow [a reference to AVM. Bennett]. The particular value of the Association was to keep knitted together the RAF in uniform and the part not now in uniform – in other words, to keep in touch. The Air Force wanted a lot of good types to come back and, frankly, the Berlin Air Lift was a great strain which would not normally be expected in peacetime.  Some people, however keen, could not be taken back because they were too old.  This was a great disappointment to them, but needed explaining so that they did not criticise the RAF and the Air Council unjustly. Pathfinders should help to keep the public in touch also. In conclusion, Lord Tedder felt that some lines of Wordsworth were appropriate:
” Who is the happy Warrior?  Who is he
That every man in arms should wish to be?
It is the generous spirit, who, when brought
Among the tasks of real life, hath wrought
Upon the plan that pleased his childish thought:
Whose high endeavours are an inward light
That makes the path before him always bright:
Who, with a natural instinct to discern
What knowledge can perform, is diligent to learn.”

Lord Trenchard, toasting .”Bomber Command,” said that he liked to think of himself as the child of the Air Force – “They made me – not I them.” He was glad to feel that he had had something to do with the formation of the Air Force and of Bomber Command. It was not an invention, but was born with the Wright Brothers. The principles  were there in the 1914-18 War, but there was no equipment. The 1st war to be won by bombers was the 2nd Afghan War; it was a forerunner of what was going to be done by Bomber Command led by “that great man Bert Harris.” No other man could have seen it through those difficulties. Also to Bennett, in and out of uniform, a great deal was owed.  Bomber Command had had more to do with ending the war than any other force. Those out of uniform could give more help to those still in than those in uniform could to those out. Talk and propaganda could help and could do much to save us from another war. The work of the American 5th and 8th Army Air Force was just as essential. Day and night bombing must go on and both nations must share the work in order to understand each other’s problems. Finally, he hoped that Bomber Command of the future would be as good as that of the past.  Air Marshal Sir Robert Saundby thought it was most appropriate that Lord Trenchard should propose the toast of Bomber Command as he was the 1st Commander of the Independent Air Force which had attempted to bomb the Rhine area. The total at any time had been 11 squadrons of single-engined aircraft, but there had been considerable effect on German production. Bomber Command had been based on the operations of the Independent Air Force.

The Independent Air Force came into being on 6 June 1918 with its headquarters situated near Nancy in France. Trenchard took over tactical command of the VIII Brigade from Haig on 5 June 1918 and complete control on 15 June 1918 when Newall became the deputy commander of the Independent Force.  As commander, Trenchard reported directly to Sir William Weir the British Air Minister, thus bypassing the then Chief of the Air Staff Frederick Sykes. The Independent Air Force was disbanded in late 1918 or early 1919

Bomber Command Losses
Sir Robert Saundby said that he considered this serious occasion was no time to be telling stories. He recalled that 48,000 men of Bomber Command had not returned from operations and 8,000 more were lost on the ground. Looking back, he thought of the wonderful spirit of Bomber Command and of its unbreakable morale. One worry the Command had never had was that of morale.  Although the heaviest casualties were being suffered there was no grumbling and no lessening of the offensive spirit.  It was true to say that the harder the work, the tougher the job and the heavier the casualties the better was the morale. The results of the air bombardment which included the contribution of the 8th Air Force, had not been so much quantitative as qualitative. It had put the Luftwaffe on the defensive with the result that it had lost the initiative in the air and lost its air superiority. In turn the whole of Germany’s industry had been put on the defensive. Bomber Command had reduced the V weapon from a serious threat to an infernal nuisance. The climax of Bomber Command’s effort was the landing and break-out from the invasion beaches. From then on it was just a help. Air Marshal Saundby thought that Stalin had not been sufficiently grateful for Bomber Command’s help, which had made it possible for the Russians to resume their offensive on the German Eastern Fronts.

Air Marshal Sir Aubrey Ellwood was proud to have been associated with the first proposals for the Pathfinder Force and to have given it his support.  He also remarked on the appropriateness of Lord Trenchard‘s presence and toast.  The Independent Air Force had been an accurate forecast of strategic bombing conception.  Referring to the vital part played by PFF and Bomber Command in winning the war, he said that the Pathfinder technique was alive in Bomber Command to-day, and crews would apply it effectively if called on again. It was a reduced force to-day and comprised a highly trained nucleus on which to build. Methods were based on the wartime PFF technique and present crews on exercises had made a good showing. This did not mean that there was any complacency, and all the time the aim was for greater accuracy and thus increased effectiveness. PFF training was still in the foreground for the future and exciting developments were in view. Air Marshal Ellwood said that he wished to correct an impression concerning morale in Bomber Command. There had been some misguided talk in the “Daily’s” There had always been grumblers – it was a healthy sign and it was unhealthy not to grumble.  It was indicative of constructiveness instead of apathy.

A round horseshoe shaped table flanked by RAF Ensigns, at the Dorchester Hotel on the 18th May 1950 at a distinguished gathering.  The occasion was a curtain raiser to the Bomber Command Night at the Royal Albert Hall (7.30pm Friday 19th May 1950).  This dinner has become a major function in the Air Affairs of this country, and our menbers who were present were proud to have as their guests most of the leading personalities in Service and Civil Aviation.

Alan is on the left inner wing (4th right) 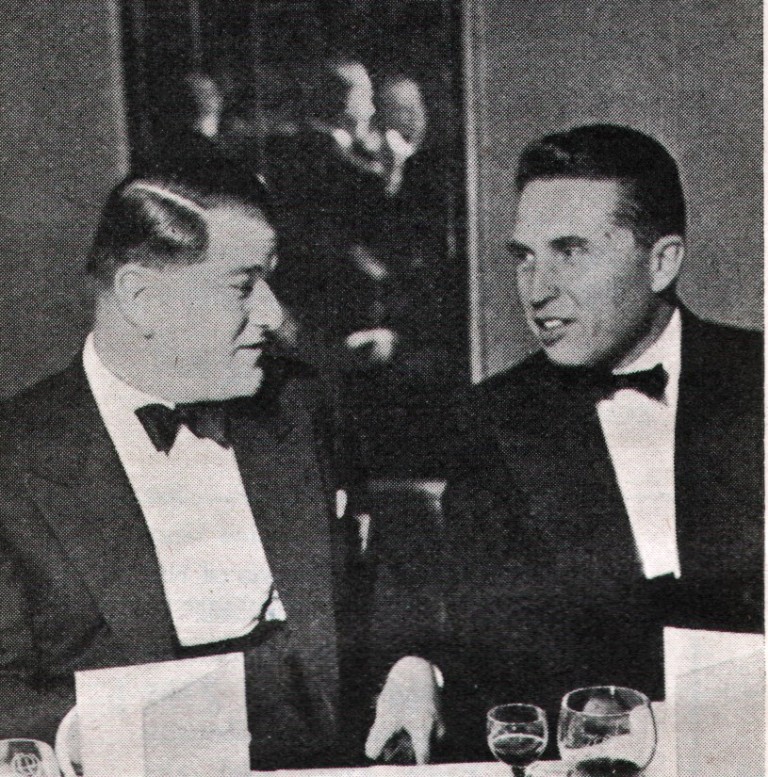 The loudest applause of the night was for someone heard not seen – Marshal of the RAF Sir Arthur ‘Bomber’ Harris,  Wartime Bomber Commander in Chief.

Surviving Pathfinders still had their Association and an Annual Dinner in the mess at RAF Wyton.

On 22 March 2012, RAF Wyton was proud to host former members of the Pathfinder Force (PFF) at the annual Pathfinder Dinner. This year see’s the PFF celebrate its 70th Anniversary, quite a milestone for the Force and the veterans themselves.

The men, who served in the 156 Squadron Pathfinder force based at Alconbury, Warboys and Upwood, met up at the Oliver Cromwell Hotel, March, Camb. 2016.

One was organised by the Pathfinder Association on 29th November 1947 and recorded for a Light Programme by the BBC.  It also featured a cabaret spot with Sam Costa and Stephane Grappelly and Arthur Young (Jazz Pianist).  Dancing to Howard Baker and his Band.  From the Ballroom of the Dorchester Hotel, Londo.  Grappelly spent the entire war in London and played in Hatchett’s Restaurant at 96 Picadilly among other established music venues of that era. Quaglino’s, Cafe Royale etc.

At least 600 PFF types and their partners met at the Dorchester Hotel Saturday, 3rd April 1948, on the occasion of the annual Pathfinder Ball. Air Vice-Marshal Don Bennett was present, and although speeches are out of order on these occasions, the guests were as usual informally welcomed by “Doc” Dr J C  McGown, Chairman of the Organising Commitee. Prizes were presented by Miss Anne Crawford, one of several film star guests.