FIDO, the Fog Investigation and Dispersal Operation, was at that time only Operational at 3 Airfields:- Graveley, 6-miles North-west of Bourn;   Downham Market 35-miles to the North-east (the installation barely completed); and Fiskerton, close to Lincoln, 95-miles to the North.  Only one of 97 Squadron’s Aircraft would land at Downham Market under very remarkable circumstances – it was to Graveley that at least 6 of the Squadron’s Aircraft would be diverted.

FIDO (Fog Investigation Dispersal Operations) petrol burners are ignited on either side of the main runway at Graveley, Huntingdonshire, as an Avro Lancaster of No.35 Squadron RAF takes-off in deteriorating weather.   FIDO was a very new system, which had only come into operational use at Graveley, (below) the Prime Test Site, in the previous month after a long series of Trials & Modifications.  The Official statement on FIDO, put out by Bomber Command shortly after the War ended and the need for Secrecy had passed, summarises what had become a desperate situation.

A FIDO System was installed at RAF Graveley to enable Aircraft to take-off & land in Fog or Snow.  A network of pipes was laid along the edges of the runway and in foggy conditions, Fuel was pumped through the Pipes at 100,000 galls per hr and ignited. The heat generated caused the Fog to rise to up to 200ft and the Flames highlighted the outline of the Runway.  It was 1st used Operationally in November 1943.

The Standard Beam Approach signals [SBA] could help the Pilots to approach to within 100 or 200 feet of the runway but they were then still flying absolutely blind at over 100 mph with the imminent danger of Crashing the Aircraft, and killing themselves and all their Crew, because they could not actually see far enough to Land.  Fog over British Airfields [had become] more of a menace than Flak over Germany…

RAF Graveley was the 1st Operational RAF Airfield to use this device known as FIDO (Fog Investigation & Dispersal Operation).  It had 2 Pipelines along both sides of the Runway and Petrol was pumped along them and then out through Burner Jets positioned at intervals along the Pipelines. The vapours were lit producing walls of flame which lifted the Fog allowing Aircraft to land safely.  Shortly after 2 other Airfields were also urgently Commissioned : (Downham Market & Fiskerton, close to Lincoln).

By the 1940s, it became apparent that the only proven method of dispersing Fog on a massive scale is by heating.  So Prime Minister Churchill called the Petroleum Warfare Department, an Organisation originally tasked with developing various creative uses of fire to thwart Enemy Invasion, and instructed them to develop a tool to defeat Fog.  The weapon that bore out of it was called FIDO.  ”Fog Investigation Dispersal Operations“. When the apparatus proved a brilliant success, it was renamed “Fog Intensive Dispersal Of,” retaining the original code-name.

FIDO consisted of 2 parallel Pipelines running along either side of the Runway through which fuel was pumped and sprayed out of Burner Jets positioned at regular intervals along the Pipeline. Before an Aircraft was due to land, Ground Personnel with a flaming torch would run or drive along the Pipes lighting the Petrol or Kerosene vapours. Flames would shoot up all along the Pipes burning with a fierce white-yellow glare, and the heat they generated would evaporate the suspended Fog droplets in a matter of minutes. The 1st successful Trial of the FIDO system was in 1942 in Hampshire, when a dense Fog of 50 yards’ visibility was c.100ft.  The glow of the Burners could be seen from a 100km away. 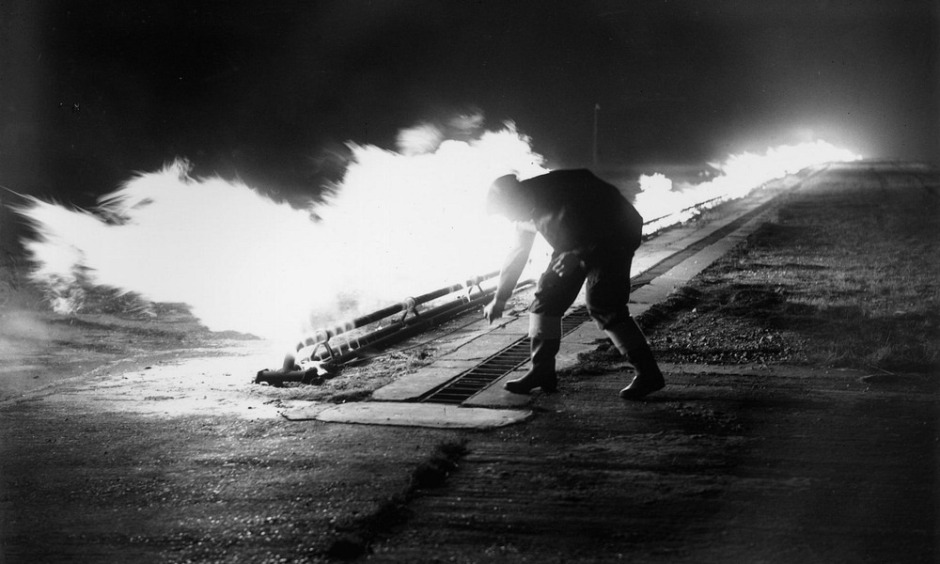 FIDO was designed to disperse the lethal Cloud & Fog, but the mechanism by which it accomplished this was plain terrifying to the uninitiated.  Vast Pipes, carrying 1,000’s of gallons of petrol, had been installed down all sides of the Runway at Graveley.  The pipes were pierced with holes, from which a fine Jet of Petrol spurted forth when the pumps were in operation.  To fire up each section of the system, a man manually set alight to the 1st Burner and then ran like hell when it ignited with a whoosh.  The rising heat dispersed the Fog & Cloud, and in addition, the glow of the flames provided a Flarepath.

The 1st operational use of FIDO took place in November 1943, after a little over a year of experimenting. Four Halifaxes landed successfully after a Bombing expedition to the Ruhr, on a night when the visibility was only 100 yards prior to the lighting of the FIDO system. The 36-nights in succession, and enabled Allied bombers to take to the air during the Battle of the Bulge in December when the entire Continent of Europe was enveloped in dense Fog.

There were only 15 FIDO Stations in the UK, mostly on the East Coast.

About an hour from home there would be a Weather Report, and occasionally, a diversion to another Airfield when Fog closed your Base. On one such occasion, we landed on FIDO – ‘Fog Intensive Dispersal Operation’.  Petrol in pipes on both sides of the Runway was ignited to burn off the Fog.  As I recall, it was said to consume 1500 gals of petrol per min at ‘startup’, and 1000 gpm in ‘Cruise’. There would have been more than 2 miles of pipe.  I believe that the number of installations and the uses of FIDO were few, but it was considered that under certain circumstances it would be cost-effective.  It was also rather ‘Lumpy’.  Today, a modern Aircraft can land in practically zero visibility, thanks to onboard Computers and modern inventions such as Radar & GPS.