In the 1920s, a General Electric Employee, Albert Hull, was researching Vacuum Tubes when he created the Magnetron. However, Hull could think of very few uses for his invention, and the magnetron remained largely unused for another 10 years.

Two Engineers from the University in Birmingham, John Turton Randall & Henry Albert Howard Boot built a small but powerful radar using a Multicavity-Magnetron. The B–17 Aeroplanes were fitted with this Radar. Now they could find and thus combat the German submarines at Night & in Fog.

In the late 1930s & early 1940s, 2 engineers named Harry Boot & John Randall decided to explore the Magnetron further. Instead of using glass to create the outer casing of the Magnetron, they used heat resistant Copper to create a Magnetron capable of incredible Microwave Output. Their creation allowed for an Output of 400 watts in a space smaller than 4ins (10cm). As Boot & Randall developed stronger Magnetron Tubes, they discovered the Tubes were ideal for Radar (Radio Detection and Ranging).  During WW2, United States submarines began utilising these Tubes, which allowed the Radar Equipment to help them detect Enemy Ships more quickly.  In the late 1940s, Dr Percy Spenser, who worked for Raytheon Corporation, further tested the output of Magnetron Tubes in his Laboratory. He noted that the candy bar in his pocket had completely melted while working with the Tubes. He decided to place a few kernels of popcorn near the Machinery to see what would happen and noticed it made the Kernels pop.

In June of 1940, Eric Stanley Megaw, based on experiments with General Electric Company E821 Glass Magnetron, had designed a Cavity Magnetron in England which worked on 10cm and became available for Aircraft Interception. This Magnetron was Air Cooled and J Randall & H Boot turned it into a Water-Cooled Unit. The Magnetron became the heart of the H2S Radar which also used a PPI CRT (Plan Position Indicator – Cathode Ray Tube) installed in British Bombers. The Cavity Magnetron had a substantial increase in performance over other Magnetrons of its time and it played a substantial role in the history of Radar.  Unlike the disclosure of the German Radar Secrets, the British worked in the strictest of confidence & secrecy during WW2 and developed the H2S Airborne Radar which used a Magnetron and a  PPI-scope. This unit worked well and could identify Targets on the ground for Night and all-weather Bombing.  In February 1943, a Stirling Bomber with the H2S Radar was shot down near Rotterdam and the Radar Unit was found by the Germans. The Germans tested this Radar. They built an improved unit by June of 1943 called the LMS 10 “Berlin.” 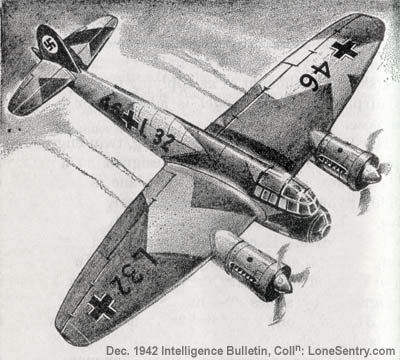 FuG 202 Lichtenstein B/C
Early FuG 202 Lichtenstein B/C units were not deployed until 1942. They operated at a maximum RF output power of 1.5Kw on the 75cm wavelength (490 MHz, or low UHF Band), requiring complex Matratze (mattress) Antennas, consisting of a total of 32 dipole elements, mounted in 4 groups of 8, each at the forward end of 1 of 4 forward-projecting Masts.

FuG 212 Lichtenstein C-1
During 1943 the Lichtenstein B/C was improved as the FuG 212 Lichtenstein C-1, with longer Range and wider angle of View, still operating at UHF Frequencies between 420 & 480 MHz and using the complex Matratze Aerial Set.  By this point in the War, the British had become experts on Jamming German Radars. A B/C-equipped Ju88 R-1 Night Fighter, Werknummer 360 043, defected in April 1943 and landed at RAF-Dyce, presenting a working example of the German Radar for the 1st time, with the Aircraft itself, still in existence as of the 21st century, becoming a Museum exhibit in the UK.  The subsequent refinement of ‘Window‘ (known as Düppel by the Luftwaffe, from the German Town it was 1st found near) rendered Lichtenstein B/C almost useless for several crucial weeks.

Junker 88 Werknummer 360043, PJ876 was reportedly flown by a defector(s) (or an Agent of the Secret Service) from Norway to RAF Dyce, Aberdeen, on the 9th May 1943.  Two (Pilot and Wireless Op/Gunner) of the 3 man Crew fully co-operated much to the consternation of the 3rd man, the Flight Engineer, who was incarcerated as a PoW.  The Pilot could have arranged this defection with the British Secret Service which wanted to acquire information about German Night-fighter Radar Technology.  The Junker Aircraft had been in service with 10./NJG 3 in Norway and was registered as D5+EV.  Reporting a fake Engine Fire to his German Radio Station the Pilot landed at Dyce under Spitfire (165 Squadron) protection.  It has been suggested that he had pro-British sympathies and whilst serving with 2/NJG2 he had landed in the UK at Debden (14th /15th February 1941) and in Lincolnshire (20th May 1941) on clandestine intelligence missions connected with British Intelligence.  Believing that the plane was lost in the sea the Germans declared it lost.  One month later they learned by a Radio Transmission from the BBC what really had happened.  On the 11th May 1943, Professor R V Jones (Assistant Directorate of Scientific Intelligence and an expert on German Radar Systems) arrived at Dyce to take charge of the evaluation of the Aircraft and its equipment.  On the 14th May, under Beaufighter Escort, PJ876 was flown from RAF Dyce to the Royal Aircraft Establishment (RAE) at Farnborough by Sqn Ldr R A Kalpas for consequent day & night time testing. 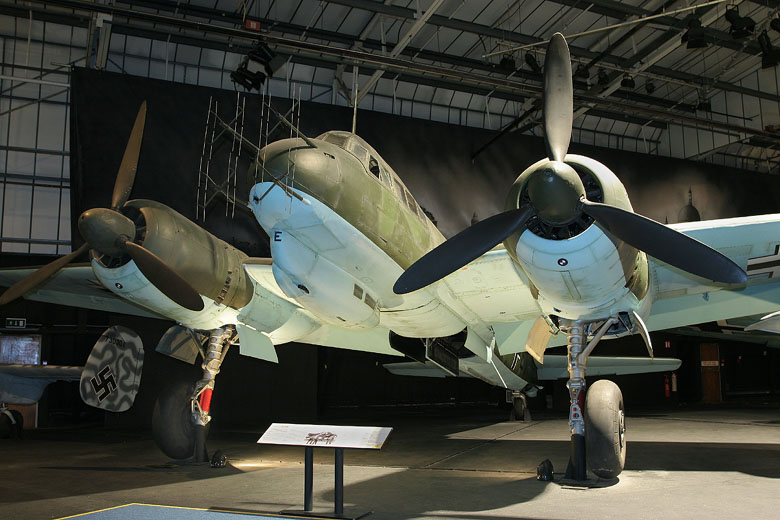 At this time RAF Bomber losses were exceptionally high due to Night-Fighter interceptions.  Detailed analysis of 360043 brand new FuG 202 Lichtenstein Radar revealed that the German Night-Fighter was using the signals from Monica (a 1cm Radar device fitted to an RAF  Bomber to give early warning of an impending night-fighter attack) to “Home-in” on the Bomber itself.  The Germans had developed the Technology to receive centimetre wavelength Radar Signals but not the Technology to generate them using a Magnetron which had been invented at Birmingham University.  PJ876 was also used to evaluate the impact of “Window” or chaff (aluminium strips) on German Radar.  On the 6th May 1944 PJ876 was flown to the 1426 (Enemy Aircraft) Flight Base at RAF Collyweston nicknamed “the Rafwaffe“.  When 1426 was disbanded on the 21st January 1945 PJ876 being selected for preservation, along with other Aircraft, & Stored.  In 1976 PJ876 was restored to Luftwaffe livery and placed on display at RAF Hendon Museum during August 1978.
FuG 220 Lichtenstein SN-2
By late 1943, the Luftwaffe was starting to deploy the greatly improved FuG 220 Lichtenstein SN-2, operating on a longer-wavelength of 90 MHz (lower end of the US VHF FM broadcast band) frequency which was far less affected by Electronic Jamming, but this required the much larger Hirschgeweih (Stag’s Antlers) Antennas, with only 8 dipole elements, looking like a much-enlarged version of what occupied the forward end of each one of the earlier quadruple Matratze Masts. This Aerial setup also produced tremendous drag and slowed the Operating Aircraft by up to 50km/h (30mph).  The 1st SN-2 set had a problem with a huge minimum range of 500 Metres, initially requiring the retention of a supplementary B/C or C-1 set with its full set of 4 Matratze Masts,

but the alarming drag that full sets of both types of antennas caused, from both Radars being installed, later changed the requirement to only a “¼” subset of the earlier Matratze Array at the end of a single Mast, centrally mounted on the Nose of the Aircraft when the BC or C-1 UHF Radar remained installed. Improvements in Spring 1944 led to newer SN-2 versions with a lower minimum Range, which allowed the older UHF radar system to be removed entirely. In July 1944, the newest version of the SN-2 radar fell into Allied hands when a fully equipped Ju 88 G-1, of 7 StaffelNJG 2, flew the wrong way on a Landing Beacon and landed in England by accident, with the Crew not realising the mistake until it was too late to destroy the Radar or IFF gear. This led to successful jamming of several frequency bands of the FuG 220 (I to III, 72, 81 and 90 MHz) but several other bands were still operational.  After the Allied Jammings, the FuG 220 Antenna setup was optimised for the still operational bands, the 90° vertical dipole setup was changed to a 45° diagonal setup.