The cards these early Airline Stewardesses are holding say “The Air League Ball” and the collecting tins appear to be labelled “The Air League of the British Empire“.  Founded in 1909 the Air League’s mission is to enhance the National understanding of the importance to the UK of Aviation & Aerospace, and to excite young people’s interest in these areas by helping them get involved. The Air League Trust is now the major provider of powered flying, ballooning, gliding & engineering scholarships & bursaries to young people & disabled veterans.  It also made extensive use of public ritual. Empire Air Day, (c.24th May) which the League held annually from 1934 to 1939, was one of its key ventures in this area.  The ‘Air League Ball‘ was probably  an additional annual  Fundraising event held at the Savoy Hotel

Marie ‘Hurricane’ Guthrie was one of 168 female Ferry Pilots in the  Air Transport Auxiliary,  and although she never saw Combat, was widely considered to be a highly capable Pilot. 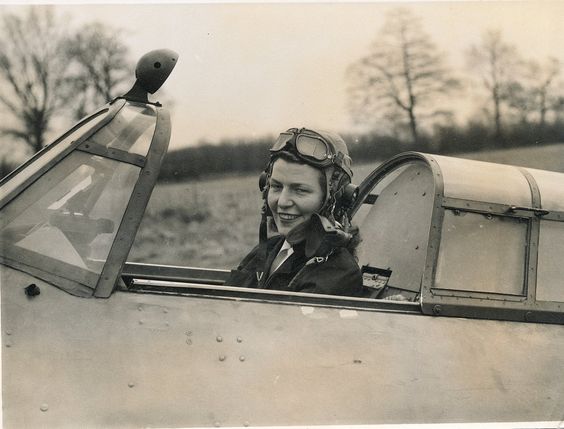 Even the Stewardesses were called Stargirls. On this 1st Flight (BSAA’s inaugural, on 1st January  1946) it was a young woman called Marie Guthrie, for whom the job was a bit of a comedown given her expertise.  During the War she had been a Pilot, Ferrying Aircraft between Manufacturer Workshops and RAF Airfields. Now, in peacetime, she had to take what she could get, and upper-class skivvying for BSAA at least promised Travel and had a certain cinematic glamour.

Former ATA Pilot and Stargirl Stewardess, Marie Guthrie with Captain Robert Clifford Alabaster (left) and his then CEO Don Bennett of BSAA Corporation in front of a Commemoration Plaque for their Inaugural Proving Flight to Buenos Aries in the ‘Star Light’ Lancastrian Airliner 40 years (1986) on at Terminal One, Heathrow.  Bennett had bribed the Contractors Foreman to clear the Runway so that the flight could be clandestinely arranged in advance of any other Airline. 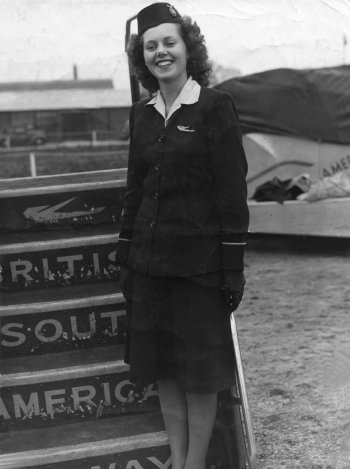 The Lancastrian Cabin was just 1.82M wide and 1.9M high. At the front, behind the Flight Deck, was a cramped Galley from where the girls, sometimes in pairs, usually working alone, were to serve defrosted meals called ‘Frood‘ (Frozen Food), which had been prepared by the Lyons Tea House Company. It was, the Star Girls would all eventually agree, pretty foul stuff. Most of them would avoid eating the hideous versions of Chicken a la King or Veal Blanquette prepared for the Passengers.  Instead, they made do with endless cups of tea sweetened with condensed milk, or the soup & orange juice which they carried in vacuum flasks for the Passengers.  At 1st washing up the china – and it always was china – was a chore. There was just a sink with cold water and no detergent, nor anywhere to put the dishes when they were done. Only later would the Company start offloading the unwashed Crockery at each Stopover.  As to drink, there was a ”Box Bar containing Spirits plus a good supply of raw Chilean Red Wine which, for some reason, the Passengers didn’t appreciate. As time passed and the Flights became routine, some of the more worldly Star Girls took to finishing off the bottles in the Galley during the endlessly dull stretches when there was nothing to do, filling their mouths with peppermints afterwards to hide the smell.

Then there were the opportunities for free enterprise. The Star Girls & Crew were paid their Expenses at the rate of 17 Argentinian Pesos to the £1, but in the change Shops of Buenos Aires, you could get a rate of £1 for 10 pesos.  Those with Spanish and initiative in equal measure would make for the Change Shops to cash up the moment they Landed.  When BSAA Routes extended to the West Indies one Star Girl called Jean Fowler, an Anglo-Argentinian who had taken the job to avoid going back to Teaching after years in the WAAF‘s, discovered there was profit to be made elsewhere. She could pick up bottles of Johnny Walker & Black Label Whisky in the Grocery Shops of Bermuda for 5/-. She then resold them in the nightclubs of Santiago, Chile, for the equivalent of £8.  She bought beautifully stitched Crocodile Handbags, just the one a trip, to be resold in Britain at a massive profit, and even a Fur Coat, which she claimed to British Customs was her own. Half a century later she looks back at her life of petty crime, shifting Contraband back & forth across the Borders of Latin America, with curiosity.  Notice the Cap badge features the Bennett ‘Pathfinder’ Eagle.
‘Frankly, I don’t know why every Girl didn’t do it,’ she says. ‘It was so simple. But then they didn’t all have a lot of gumption.‘ To work as a Star Girl for BSAA you had to be unmarried and of ‘a certain Class‘. The Airline only wanted what they defined as ‘nice Girls‘ and while some like Jean had come to adulthood during the curious freedoms of the War, for many others BSAA was their 1st job after leaving home. They would no sooner have taken to a little bit of Smuggling on the side than they would have sworn in Church.  Most of the Star Girls came directly to the Airline from the WAAF or WRNS and some of them spoke Spanish or Portuguese having originally been Volunteers from South America.

BSAA was one of the 1st British Airlines to employ Stewardesses and there were considerable numbers of applicants for the few Vacancies. Their pay was pitifully low, under £3 a week.  One of them related to me an account of her interview prior to her acceptance by the Airline.  She was told very bluntly that she would always have her own room when on Service and a key to lock it.  Accordingly, the Company did not wish to hear of any complaints by the Girls of any propositions by amorous Pilots.  Girls came cheaply and were easily replaced. Good licensed Pilots were a rare breed and would not be dispensed with for frivolous reasons.

“On my 1st Trip,” she said, “I locked the door and wedged a chair against the lock but nothing untoward threatened. So next Trip I just locked the door.  After my 3rd Trip, my morale was really shattered.  I gave up locking the door and took to looking up and down the passage and wondering what everyone else was doing”. 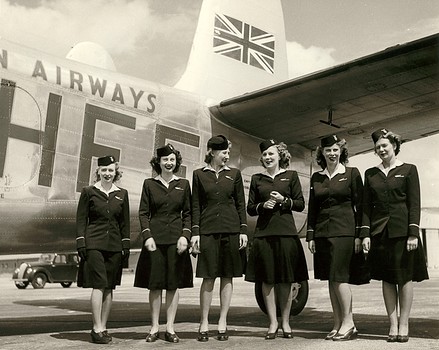 Eve Huntley-Flindt later Branson and mother of entrepreneur Richard was born into a Stock-broking Family, Evette was an Athlete & a Dancer and a Glider Pilot Instructor for RAF Recruits (disguised as a man!). She eventually joined the Wrens as a Signaller until the end of the War.  After the War, she became an Air Hostess with British South American Airlines (BSAA), flying in Lancastrians & Avro Yorks. A very glamorous job at the time, the requirements were that you had to be very pretty & unmarried, aged between 23 & 27, speak Spanish, and be trained as a Nurse. Undaunted that she couldn’t speak Spanish and wasn’t a Nurse, she conned her way into the Training Course and soon became a BSAA “Star Girl“.  Duties included offering chewing gum, barley sugar, cotton wool & Penguin Paperbacks to Passengers as well as rudimentary meal preparation. When BSAA contributed to the legend of the Bermuda Triangle with 2 unexplained losses of the new Avro Tudor IV, Ted Branson made her ineligible to keep flying by marrying her!  These days she continues to Fly as the inspiration for Galaxy Girl – the Logo on Branson’s Virgin Galactic Airline. The 1st Plane, a Rutan White Knight II, is named Eve after her and carries her likeness (as she looked when she was an Air Hostess) as Virgin’s Trademark Flying Girl on the Nose.

Safety Film being displayed on a BSAA Avro York in the 1940’s.

The Star Girl is operating a Projection Camera that only uses safety Film in Flight.