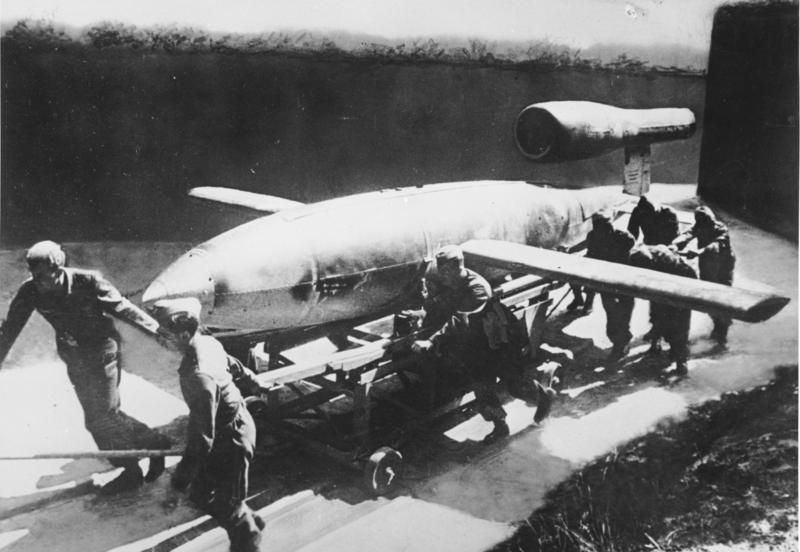 It was an early Cruise Missile and the only Production Aircraft to use a Pulsejet for power.  The V-1 Flying Bomb was the 1st of the so-called “Vengeance weapons” (V-weapons or Vergeltungswaffen) series designed for terror bombing of London. It was developed at Peenemünde Army Research Centre in 1939 by the Nazi German Luftwaffe during WW2.  During initial development, it was known by the codename “Cherry Stone“. Because of its limited range, the 1,000’s of V-1 Missiles launched into England were fired from launch facilities along the French (Pas-de-Calais) & Dutch coasts. The 1st V-1 was launched at London on 13 June 1944, one week after (and prompted by) the successful Allied landings in Europe.  At its peak, more than one 100 V-1s a day were fired at South-East England, 9,521 in total, decreasing in number as Sites were Bombed or Overrun until October 1944, when the last V-1 site in Range of Britain was overrun by Allied Forces. After this, the V-1s were directed at the Port of Antwerp and other Targets in Belgium, with 2,448 V-1s being launched. The attacks stopped only a month before the War in Europe ended, when the last Launch site in the Low Countries was overrun on 29 March 1945. 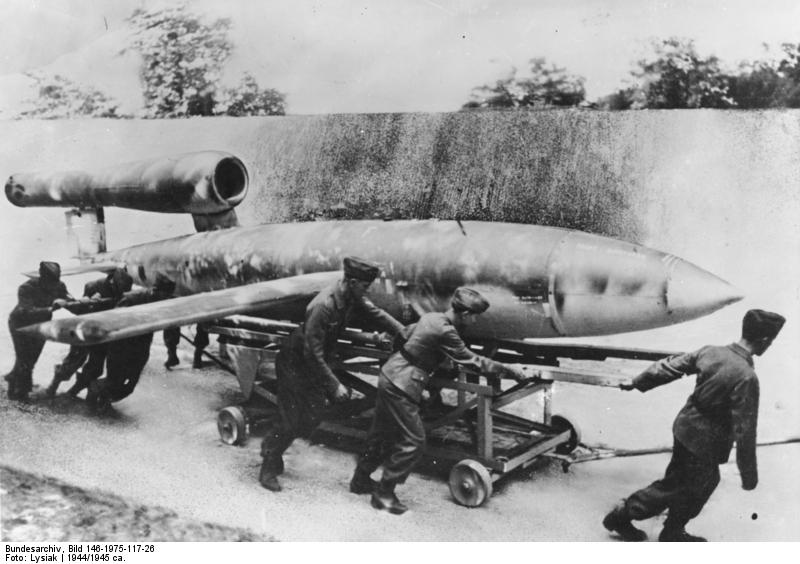 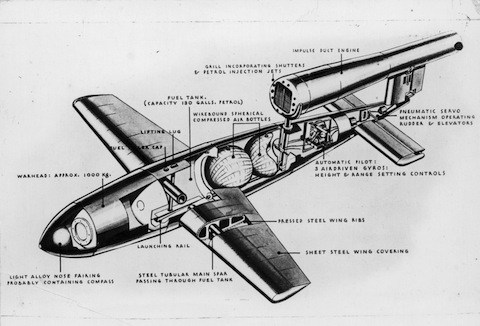 The V-1 was capable of killing large numbers of people, inflicting terrible injuries and causing huge material damage to buildings & homes. The  V-1 caused blast damage over a wide area.  It exploded on the Surface, and a huge blast wave rippled out from the epicentre.  As it did so it left a Vacuum, which caused the 2nd Rush of air as the Vacuum was filled.  This caused a devastating pushing & pulling effect.  At the impact site, houses or buildings were totally demolished. In inner London Suburbs where terrace houses were packed together, sometimes up to 20 houses would totally collapse. Brick walls were pulverised into small fragments.  Further out from the epicentre walls, roofs & window frames were ripped out exposing the contents and innards of the house.  Further out still, all the windows were blown out and roofing slates were blown off. Every time a Doodlebug landed 100s of houses were damaged. Ranging from demolition to slight damage.  This was a cold, wet summer and repairs would take many months.  Londoners were de-housed in their tens of 1,000’s or shivered in cold, damp and roofless houses. The Blast area of a V-1 extended across a radius of 400-600 yards in each direction.  Anyone unlucky enough to be close to the impact site would be blown apart or suffer crush injuries from falling masonry.  Others would be trapped below collapsed buildings and have to be dug out.  Further away from the impact site awful injuries were inflicted by shards of flying glass.  During the course of the attacks, the nature of the injuries changed somewhat.  In the beginning, people were caught unaware on the street and injuries from flying glass were widespread.  Later on, people had understood the necessity of shelter in safe(er) areas of their home e.g. under the stairs. However, this had the effect of less flying glass injuries but more crush injuries from people being buried in the ruins of collapsed houses.  The toll of human suffering was approximately 6,184 people killed by V1’s and 17,981 seriously injured and maimed.  Tens of 1000’s of others received lesser injuries.  Countless more would suffer the pain of bereavement or from the loss of their home and treasured possessions.

In 1934, Georg Madelung and Munich-based Paul Schmidt proposed to the German Air Ministry a “Flying Bomb” powered by Schmidt’s pulsejet. Madelung co-invented the ribbon parachute, a device used to stabilise the V-1 in its terminal dive. Schmidt’s prototype bomb failed to meet German Air Ministry specifications, especially owing to poor accuracy, range & high cost. The original Schmidt design had the pulsejet placed in a fuselage like a modern jet fighter, unlike the eventual V-1 which had the engine placed above the warhead and fuselage. The Argus Company began work based on Schmidt’s work. Other German manufacturers working on similar pulsejets & flying bombs were The Askania Company, Robert Lusser of Fieseler, Dr Fritz Gosslau of Argus and the Siemens company, which were all combined to work on the V-1.  With Schmidt now working for Argus, the pulsejet was perfected and was officially known by its RLM designation as the Argus As 109-014. The 1st unpowered drop occurred at Peenemünde on 28 October 1942 and the 1st powered flight on 10 December 1942.

The Pulsejet was evaluated to be an excellent balance of Cost & Function: a simple design that performed well for minimal cost.  It would run on any grade of Petroleum and the ignition shutter system was not intended to last beyond the V-1’s normal Operational Flight life of 1 hour.  Although it generated insufficient thrust for takeoff, the V-1’s resonant jet could operate while stationary on the launch ramp. The simple resonant design based on the Ratio (8.7:1) of the diameter to the length of the exhaust pipe functioned to perpetuate the  Combustion Cycle, and attained stable resonance frequency at 43cps. The engine produced 2,200N (490 lbf) of static thrust and approximately 3,300N (740 lbf) in flight.

Ignition in the As 014 was provided by a single automotive spark plug, mounted approximately 75cm (30in) behind the front-mounted valve array. The spark only operated for the start sequence for the Engine; the Argus As 014, like all pulsejets, did not require ignition coils or magnetos for ignition — the ignition source being the Tail of the preceding Fireball during the Run.  The Engine casing did not provide sufficient heat to cause diesel-type ignition of the fuel, as there is insignificant compression within a pulsejet engine.  The Argus As 014 valve array was based on a shutter system that operated at the 43 to 45cps frequency of the Engine. Three Air Nozzles in the front of the Argus As 014 were connected to an external high-pressure source to start the engine. The Fuel used for Ignition was Acetylene, with the technicians having to place a baffle of wood or cardboard in the Exhaust Pipe to stop the Acetylene diffusing before complete Ignition. Once the Engine Ignited and the minimum operating temperature was attained, external hoses &d connectors were removed.

The V-1, being a Cruise Missile, lacked Landing Gear, instead, the Argus As 014 was launched on an inclined Ramp powered by a Piston-driven Steam Catapult. Steam Power to Fire the Piston was generated by the violent exothermic chemical reaction created when hydrogen peroxide and potassium permanganate (termed T-Stoff and Z-Stoff) are combined.  The principal military use of the pulsejet engine, with the volume production of the Argus As 014 unit (the 1st Pulsejet Engine ever in volume production), was for use with the V-1 Flying Bomb. The Engine’s characteristic droning noise earned it the nicknames “Buzz Bomb” or “Doodlebug”.  The V-1 was a German Cruise Missile used in WW2, most famously in the Bombing of London in 1944.  Pulsejet Engines, being cheap and easy to construct, were the obvious choice for the V-1’s designers, given the Germans’ materials shortages and overstretched Industry at that stage of the War.

V-1 Launching Sites in France were located in 9 general areas – 4 of which had the Ramps aligned toward London. The remainder were towards Brighton, Dover, Newhaven, Hastings, Southampton, Manchester, Portsmouth, Bristol, & Plymouth. The Sites on the Cherbourg Peninsula targeting Bristol & Plymouth were captured before being used, and eventually Launching Ramps were moved to Holland to Target Antwerp (1st launched on 3rd March 1945 from Delft).  Initially, the V-1 Launching Sites had Storage buildings that were Curved at the end to protect the contents against damage from Air Attacks.  On Aerial Reconnaissance pictures of these Storage Sites from above looked like Snow Skis (“ski sites”).  A 28th October 28, 1943 Intelligence Report regarding construction at Bois Carré near Yvrench prompted No.170 Squadron RAF Reconnaissance Sortie E/463 on 3rd November which detected “ski-shaped buildings 240-270 feet long.”  By November 1943, 72 of the Ski Sites had been located by Allied Reconnaissance, and Operation Crossbow began Bombing the Original Ski Sites on 5th December 1943. Nazi Germany subsequently began constructing modified Sites with Limited Structures that could be completed quickly, as necessary.  This also allowed the modified Sites to be quickly repaired after Bombing. However, the work to complete a modified Site before Launching allowed the Allied Photographic Interpreters to predict on 11th June 1944 that the V-1 Attacks would begin within 48 hours, and the 1st Attacks began on 13th June.

Storage Depots
Domléger near Abbeville – Bombed on June 14 & 16, and on 4th July 1944
Renescure near Saint-Omer – Finished in November 1943, it was Bombed by the USAAF on 16th June 1944 by 48 B-24s & on 2nd July by 21 B-24s
Sautricourt near Saint-Pol Bombed 16th June 1944
The Nucourt  Limestone Cave complex between Pontoise and Gisors was Bombed on 22nd June 1944 with 298 V-1s buried or severely damaged.
Rilly-la-Montagne Railway Tunnel was attacked by the British with Tallboy Earthquake Bombs on 31st July collapsing both ends of the Tunnel.
Saint-Leu-d’Esserent Mushroom Caves was the largest of the Underground V-1 Sites. It was attacked by No. 617 Squadron RAF with Tallboys on 4th July.
A larger “Heavy Crossbow” Bunker was built at Siracourt, between Calais and the River Somme, as a V-1 Storage Depot.
Abbeville & Amiens.  22/23rd December 1943 – 51 RAF Aircraft attacked 2 Flying-Bomb Sites. One was destroyed, but the other was not located.