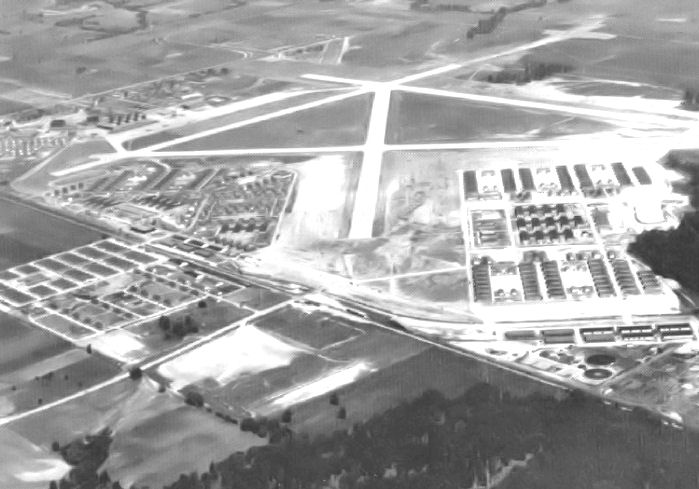 Scott Air Force Base is strategically located in the Centre of the Nation and known as the ‘Crossroads of America’. The Base is 25 miles East of St Louis, Missouri, near Belleville, Illinois.

A new Airfield was built on a 624 acre (252.5ha) site in April 1917 during WW1. It was named as Scott Field in the honour of maiden enlisted person Corporal Frank S Scott who died in an Aircraft Crash. The Scott Field became Operational in September 1917. The Squadrons assigned to the field were disbanded in November 1918.  The Scott Field was acquired by the War Department in 1919. 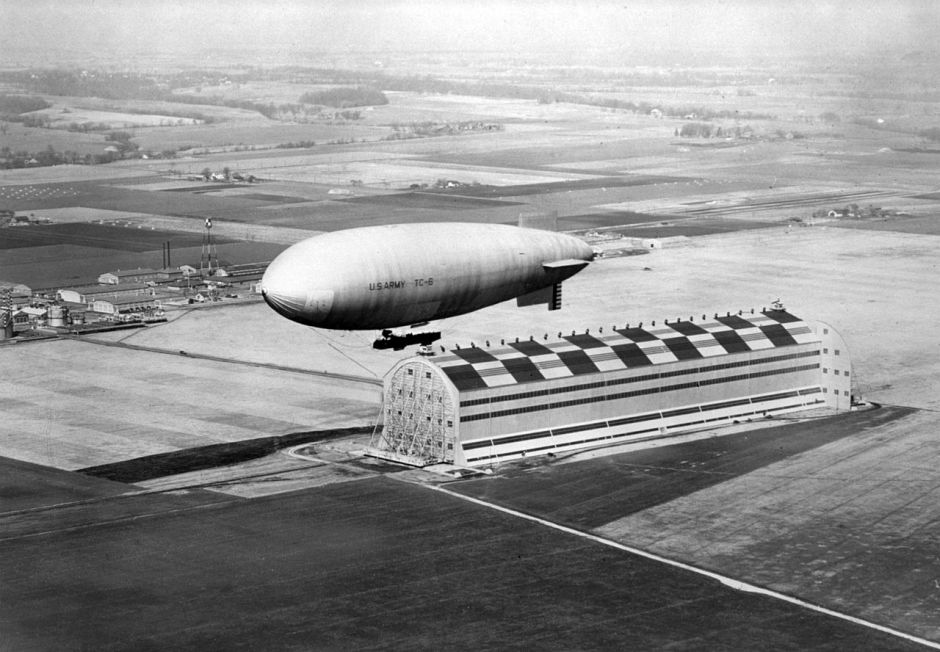 Scott Field was transformed into a Lighter-than-air (LTA) Station (Airships)  in 1921. Lighter-than-air Ships were used at Scott Field to research the capabilities of Aerial Photography, Meteorology & Conduct Altitude Experiments.  In the late 1920s, emphasis shifted from Airships to Balloons.  In 1929, the 12th Airship Company was deactivated and replaced the next day by the 1st Balloon Company. 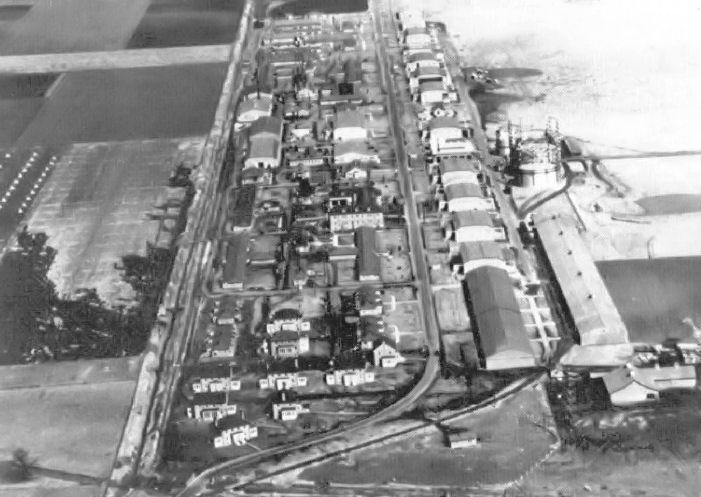 Aeroplanes began to dominate activities at Scott Field, and in 1937, the Lighter-than-air activities Officially came to an end.  Scott Field’s Central Location was advantageous when it was considered for the relocation site of the General Headquarters Air Force, which managed the Combat Arm of the US Army.  It was made the General Headquarters of the USAF in June 1938. Scott Field grew from 628 acres in 1938 to 1,882 acres in 1939.  Most of the framed WW1 and Lighter-than-air Hanger Constructions were torn down – only a few, such as the 9th Airstrip Squadron Headquarters/Barracks Building, a Brick Theatre and 9 Sets of Brick Non-Commissioned Officers’ Quarters at the South end of the Field were saved.

The buildings & wooden barracks were demolished and new facilities, such as administration buildings, family quarters, barracks & hangars were built to meet the USAF’s needs.  The control over Scott Field was transferred to the Army Air Corps in June 1939.  The Field was designated as the Communication Training Centre of the USAF in August 1941.  About 160 new buildings, Cantonment areas and an Induction Centre were built at the field. The field was renamed as Scott Air Force Base in late 1941. 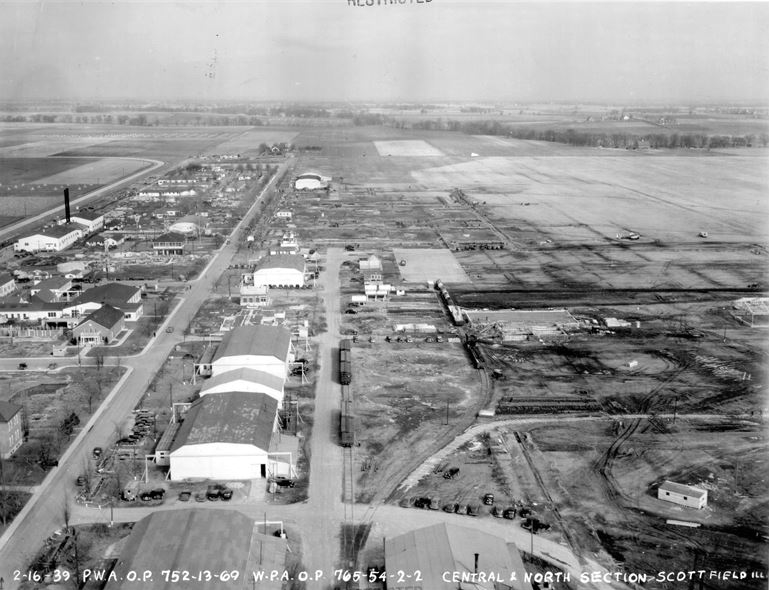 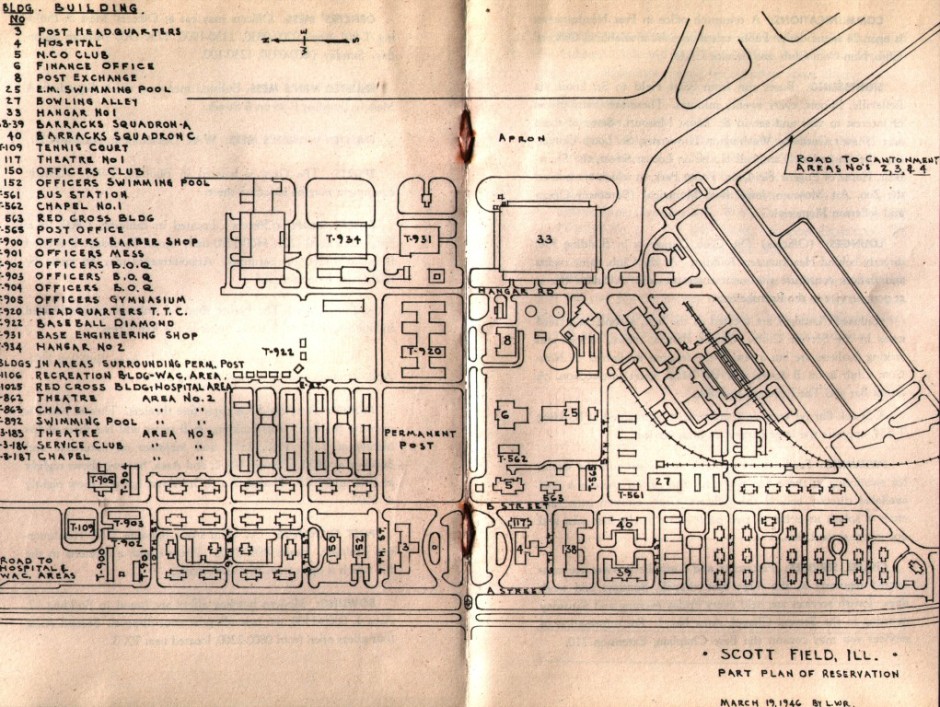 New Housing, Industrial & Administrative Buildings were completed by May 1939. The expansion Program continued into 1940 with the Construction of 21 more Buildings, including a 200-man Barracks, a 300,000-gallon elevated Water Tank, a 43-bed Hospital, Hangar No.1 and a General Headquarters Air Force Office.

During WW2 Scott Field’s Main Mission was to Train Radio Operator-Mechanics.  By June 1945, Scott Field had Trained 77,370 Technicians who went on to be responsible for vital Command & Control Communication throughout the Air Force.  In January 1948, Scott Field was redesignated Scott Air Force Base. Scott AFB continued as a Major Training Base for the Air Force until 1957.  The 1405th Air Base Wing maintained the Base Properties and served as the Base’s Home Unit, which as of 1990 housed the 375th Military Airlift Wing.

Whilst there Craig made a visit as Passenger in a C47 Dakota Piloted by a Capt Jones on Tuesday 23rd July to Lambert Field, Nr St Louis where McDonnell Douglas Aircraft Company were producing the Phantom Jet Fighter & Curtis Wright produced P40’s.   McDonnell Aircraft Corporation was awarded the contract to Design & Produce the Phantom, the Navy’s 1st Jet Fighter, which in 1946 became the 1st American Jet to operate from an Aircraft Carrier.    When Curtiss-Wright ended Aircraft Production after WW2, McDonnell Aircraft took over its former Plant at Lambert.

It is named after Albert Bond Lambert (1875–1946). He learned to fly with the Wright Brothers, received his Pilot’s License in 1911, and Served in the US Army in WW1, reaching the Rank of Major.  Throughout his life he worked tirelessly to make St Louis a Leader in Aviation.  Major Lambert was responsible for bringing the 1923 International Air Races to St Louis, and the Kinlock Park Airfield was christened “Lambert St Louis Flying Field” in recognition of his achievements.  The 21 yr old Pilot Charles Lindbergh flew to St Louis to attend the Air Races and decided to remain at Lambert as an Instructor.  There would have been no Lindbergh without Lambert.  Albert Bond Lambert was the first to really believe in what Lindbergh wanted to do — to fly across the Atlantic, a single-engine Aeroplane by himself. Lambert, when he heard about it, told Lindbergh, ‘I’ll put the first $1,000 toward your project.‘ When others found out that A B Lambert believes in this kid and his audacious idea, they thought that maybe they should get on board, as well.

Other Aeroplane Builders also went into Business: Donald Douglas, William Boeing, & Alan Loughead, who pronounced his Scottish name “Lockheed,” and took to spelling his Company’s Name that way.  All 3 found good Prospects. Donald Douglas got started by working with a wealthy enthusiast who wanted an Aeroplane that could Cross the Country nonstop.  By building it, Douglas gained experience that allowed him to develop a Long-range Army Plane, the World Cruiser.  Two World Cruisers flew around the world in 1924 in a succession of Short Hops.  The Flight would Start & End at Sand Point, a small Military Airfield a few miles northeast of downtown Seattle on the shore of Lake Washington and travel Westwards crossing the Pacific via the Aleutian Islands & Japan.