It was a most demanding Course, mostly consisting of taking off up to 100ft or so, at which point the instructor pulled a Screen over the Trainee’s side of the Cockpit blacking out everything.  From then on flying was by Instruments only, guided by the Radio Beam System until on the Final Stage of the Approach for Landing, when the Instructor then removed the Screen.  The Beam Approach (sometimes known as Blind Approach) system relied on 2 audible Signals, Morse A (dit-dah) and N (dah-dit) which originated from differing parts of the Airfield, which was “divided” into 4 Quadrants.  Listening to the Signals, the Pilot knew which side of the Airfield he was flying in from.  When he started hearing both Signals of different strengths, he was aware of how close to the Centreline he was.  When both Signals merged and became a continuous sound, he knew he was “on the beam“.  Ancillary Signals enabled the Pilot to land in very poor conditions. This is a huge simplification of what was, in fact, a complicated set of learned instructions involving many changes of Direction & Height as well as swift calculations of Orientation in response to the audible Signals you were receiving.

QDM is the starting point, Aircraft to the Station and magnetic

The Beam Approach System was a relatively new Technology in 1942 and was still very much under development.  The idea was to guide tired and often injured Crews to land safely in the dark or in reduced visibility such as Fog.  During this time, Upavon became a Flying Training School. 1537 BAT Flight (Airspeed Oxfords).  The Beam Approach System would be installed only on the Main Runway with 2 Main Beacons (inner & outer) which transmitted Signals to a Receiver set in the Aircraft.  A fixed narrow Radio beam gave out a continuous tone Signal when the Aircraft was correctly in line with the Runway, to the Left of approach dots would be heard and to the Right and dashes were heard on either side when flying Offline. The Pilot had to keep the Aircraft flying along the line of the continuous Tone (Riding the Beam) until he reached the Airfield and was able to land. Once within 10 or 15 miles of the Aerodrome, the Beam Approach System was turned on and the Guidance System would begin.

On The Beam: some Stations were equipped with a Landing Beam which told the Pilot he was on the correct glide slope for landing.  If he flew too much to Port he would hear a series of Morse dots and if too much to Starboard a series of Morse dashes. The idea was to keep a steady Tone in one’s Earphones.  This System also showed up in some Aircraft as a set of Lights showing that one was on the correct Beam or too ‘wide’.  Also used for flying on a Navigation Beam such as Gee or Oboe.  The phrase was generally applied to being on the right course of action about nearly anything, as in “I think the Wing Co’s on the Beam about not flying over the Alps again.“ 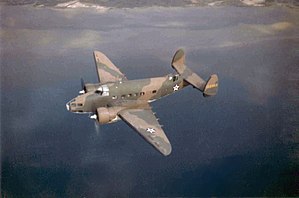 Airspeed Oxford – a wood and fabric Twin Engine low wing monoplane with mostly very benign characteristics.
Oxford II Armstrong Siddeley Cheetah X engines Inertial started – hand-cranked Oxford V Pratt & Whitney Wasp Junior Engines Started with an External Generator.
Take Off 65mph
Climb 110mph
Cruise 120+mph
Approach 85mph
A major snag was that the School was equipped with the 2 Mks of Oxford, the Engines of which rotated in opposite directions and it was necessary to apply the correct Rudder on landing to counteract a tendency to Swing when the throttles were closed on Touch-down. Getting it wrong resulted in a spectacular Ground Loop, and it was a good incentive to remember which Mk was being flown RAF Officers School Cosford Shropshire – Throughout the War years many & varied Units came to Cosford, (an Officers’ School) –

RAF No.5 PDC Padgate 22nd August to 13th September 1942 Personnel Despatch Centre
Probably for Security reasons, Aircrew Members selected for Training at Nassau in the Bahamas had no prior warning of being sent there, they were sent off to an undisclosed destination to eventually find themselves crossing the Atlantic in a Troopship, to Halifax, Nova Scotia or New York followed by a long train journey South & Sailing over to the Bahamas on the 640 ton ‘Jean Brillant‘ from Miami to Nassau.

A L J Craig was appointed as a Flight Lieutenant (Permanent) with effect from 1 September 1942.
Note: His service number is given wrongly as 112392, but this is corrected in a later Gazette. (103561)

RNVR Clubhouse
The RAF Reserves Club, which was started in 1946 for serving and ex-members of the RFC, the RAFVR, & the RAuxAF, is continuing to “Lodge” at the RNVR Clubhouse at 38, Hill Street, Berkeley Square, pending Acquisition of its own premises. By arrangement with the RNVR Club, all Reserve Club Members are given the full facilities of the Clubhouse, which include the use of all rooms and Residential Accommodation. For Town Members, the Annual Subscription is 2 Guineas, and for Country Members 1 Guinea.  The Membership year ran from July, and Applications for Membership were addressed to the Secretary, RAF Reserves Club, 38, Hill Street, London, W.1. – Private Members Club in a beautiful 18th century Georgian house designated as a War Memorial to those members of the RNVR who lost their lives in 2 World Wars.  Alas depleted like the Pathfinder’s Club and now a Naval Club.

A classic London Townhouse, built in the early 18th century as part of the exclusive new Mayfair Development. At that time, the house included Outbuildings and Stables in Waverton Street.  One of the 1st Occupants of the House was the Earl of Chatham, brother of William Pitt the Younger.  In the 19th century, the Building was enlarged at the rear to form a fine new Dining Room. This Room, now the Ground Floor Bar, contains fine examples of Victorian Panelling, Mouldings and Carvings.  The Building was subsequently acquired by the Raphael Family and remained in Private Ownership until WW2 when it was requisitioned for use by the Auxiliary Territorial Service, as the Women’s Arm of the British Army was then known.  As early as 1943, Royal Naval Volunteer Reserve (RNVR) Officers serving in nearby Whitehall had an aspiration to keep in touch with one another when the War was over. They formed the RNVR Officers’ Association and purchased the Freehold of 38 Hill Street in 1946, and it has been the home of the Association and The Naval Club ever since.  In June 1954, 38 Hill Street was dedicated as a War Memorial to the RNVR and houses the Roll of Honour of all RNVR Officers and Ratings who died in the Service of their Country. The RNVR was 1st formed in 1873 and provided continuous service to the Country from 1903 to 1958 when it was unified with Merchant Navy Officers willing to volunteer to form the Royal Naval Reserve.  On 22nd November 2000, His Royal Highness the Duke of Edinburgh unveiled the RNVR Roll of Honour which lists all Naval Volunteer Reserves who died, including those of the Dominions and Commonwealth.  In 1987, the House was listed as a Grade II building with particular reference to the Grand Staircase with its ornate balustrade decor and wrought ironwork, and the 1st floor Louis XVI style Dining Room.